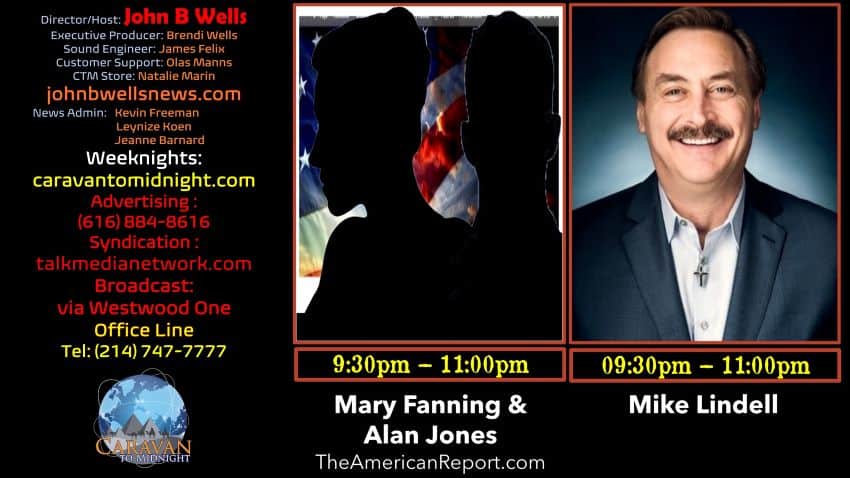 They also exposed Gulftainer’s connection to Iraq’s Unit 999 terror squad that was involved in the Oklahoma City bombing.

Fanning and Jones were the first journalists to make the connection between President Trump’s tweet where he accused President Obama of wiretapping Trump Tower to the super surveillance system known as THE HAMMER that had been commandeered by President Obama, John Brennan, and James Clapper. Their work has appeared at The Center For Security Policy, Breitbart News, Real Clear Defense, Communities Digital News, Lifezette, 1776 Channel, and The American Report. www.TheAmericanReport.org

• Mike Lindell
In August 2016, Lindell met with then-Republican presidential candidate Donald Trump, and became an avid supporter, calling Trump “the most amazing president this country has ever seen in history”, following his 2016 election. In a speech at Liberty University in August 2019, Lindell said “When I met with Donald Trump, it felt like a divine appointment, and when I walked out of that office I decided I was going to go all in.

On October 19, 2016, Lindell attended the final presidential debate in Las Vegas. He spoke at a Trump campaign rally in Minneapolis on November 6, 2016, and attended the Official Donald Watch Party on November 8. He attended Trump’s inauguration, and Trump gave him an inauguration lapel pin as a personal gift.

In 2017, Lindell sat next to Trump at an industry roundtable event at the White House.