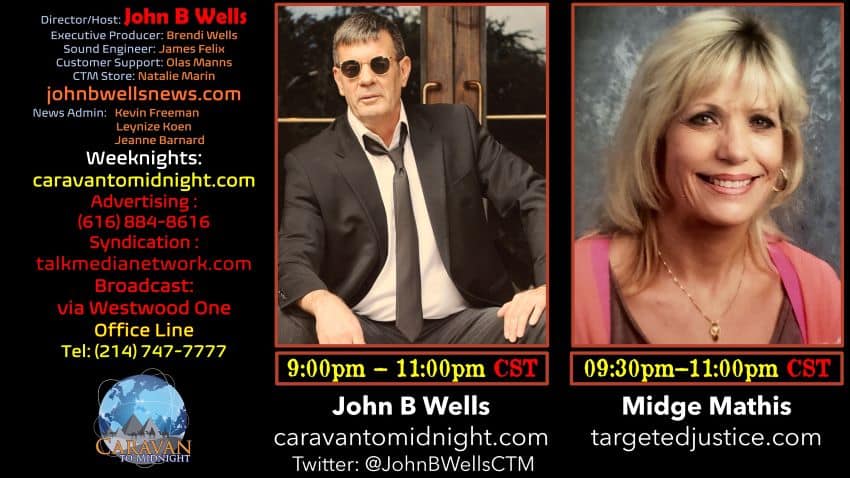 Originally from Waco, Texas, raised in Arizona. Midge is a mother, grandmother, and a Christian. In 2015 I brought a Civil Suit against my ex-husband & our business attorney for breach of fiduciary duty for conspiracy to withhold information of assets during my marriage & divorce, totaling into the millions. During the Civil Suit, the business attorney named in the Civil suit died. Shortly thereafter I was set-up by my ex-husband & his business partners. Character assassination ensued with an illegal FISA Warrant obtained & placed on my name in 2015, just like President Trump & the Steele Dossier.

I was then put under Enhanced Surveillance. One day I stumbled upon information that confirmed my ex-husband is a DOD contractor, that he had a secret life our entire marriage. The day I met with the FBI, looking for answers, I was poisoned. A test with an Industrial Toxicologist confirmed the poisoning.

While doing research, I came upon articles about Targeted Individuals & Gang Stalking, which described exactly what I was experiencing. While attending a Hope & Unity Conference in Boston, Massachusetts, I met other Targeted Individuals. It was at the conference I presented my idea to others, to form a group to support whistleblowers, Targeted Individuals, exposing the illegal targeting program of innocent citizens by the Deep State. We named our group Targeted Justice.

With a fierce passion for human rights and justice, Midge conceptualized the idea of TargetedJustice.com and is one of its co-founders. Targeted Justice is a civil rights group supporting whistleblowers and Targeted Individuals. For most of her adult life, Midge has been an EMT, an advocate in the healthcare industry primarily in Emergency Medicine. Midge also worked for two governors for the Board of Behavioral Health for the state of Arizona. Midge also has been a business owner, designing and building million-dollar homes in Tucson, Arizona. She is committed to exposing hate crimes against humanity while supporting and advocating for those who have been unlawfully blacklisted.

In 2019, Targeted Justice made three trips to Washington D.C. advocating for Whistleblowers and Targeted Individuals, visiting the offices of over 300 legislators. We protested at the CIA headquarters in Langley, Virginia 6 times.

On our D.C. trip in October of 2019, we held a rally, at the Elipse Park in front of the White House. We also protested in Colorado Springs at Schriever Air Force Base four times where the command center is located for the satellite system used for the targeting program. Protested at Raytheon in Albuquerque, New Mexico, and Kirtland Air Force Base, where the microwave weapons are made. Attended the first Targeted Individual Day in Chicago. I recently have left Targeted Justice for personal reasons, choosing to pursue other endeavors exposing crimes against humanity.