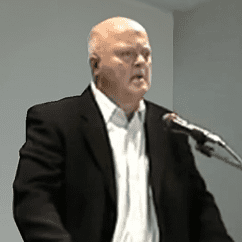 On the Run.
David  freely sends this simply written, entertaining , intriguing and most enlightening biography to inmates of all kinds around the world  as a part of his personal testimony and his work in ministry.

David Brenn runs The Masters Prison Ministry. David has a prisoner story that’s even more intricately surreal than ‘The Prisoner’, Patrick McGoohan’s. He too has been inspired in his own way and has compiled his own version of the Apostle Paul’s writings while incarcerated.

David was the 2nd oldest of 8 children who grew up in the Parkdale area of Toronto during the 50’s and 60’s.

As early as he can remember, he stole from family, neighbors, and friends. Physical abuse at the hands of his father to stop this stealing, only led David to seek affection elsewhere. As a youth, David ended up selling his body to older men for money.

At 17, David threatened to kill his own father after learning his father beat his mom. Following this, David was forced, by his father, to leave his home and family. At 18, David was homeless on the streets of Toronto.

A promising professional baseball career was traded for a stay in a Mental Hospital. For the next 15 years, David was in and out of relationships, with 2 marriages ending in divorce. He was drinking heavily and addicted to street drugs to dull the pain of rejection. Becoming a jail guard seemed to be a natural choice at that time in his life. He was a large framed muscular individual, and after all many of his friends and acquaintances from the mean streets he grew up on, were already inmates where he was going to work. He began selling contraband to inmates and people he partied with on the outside. Eventually, the premise of honour amongst thieves, convicts and drug users failed and he was arrested.

By his early 30’s David was going to prison and considered ending his life. In a prison cell, he cried out to God, who was always listening, and the rest as they say, is history.

Now, years later, David is blissfully married to his lovely bride of 36 years, who faithfully stayed by his side during the dark years. They have 2 wonderful sons Josh and Luke aged 27 and 31.

David’s story is not your typical jail house conversion. He went back “inside” and now works lighting fires in the hearts of men who are incarcerated, with the Word of God.

In spite of his decades of literal and spiritual freedom, David realizes even more than most that as people inside and outside of the walls, we are each and all of us living within a prison of our own; drugs, habits, illness, desires, or anything else we humans may be captive to.

In addition to his life in and around the penal system, David worked for many decades in the automotive recycling industry, loyally managing sales for a multimillion dollar family business for some people that gave him a chance to make something of himself. This vocation also gave him the opportunity meet many people “over the counter” with needs beyond a used alternator, radiator, or car radio. Many of them walked in needing parts but also walked out with a new faith, a new heart, and a lifetime universal warranty.

His website has excerpts from his book to indicate what his message is, and several YouTubes are a good indication of his ongoing works and his ways. David now works within several penal institutions locally in Toronto and corresponds globally with inmates, ex-convicts, and their family members.