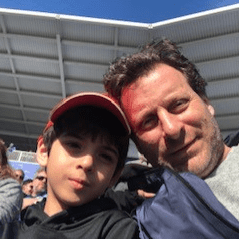 Gaetano Orsina and his wife Ghizlane are the parents of two young boys, Matteo, 8 yrs. old and Alessio 6.  They reside in Montreal, Quebec.  Each one of their sons was born without any abnormalities or developmental deficits. They were vibrant, outgoing babies and had hearty appetites. Matteo was eating pizza all on his own at 8 mos. old like any good Sicilian bambino should.

Upon receiving his series of vaccines at 6 mos. of age, chronic and repetitive ear infections were very common. Yet they were told one of the vaccines given was to protect against ear infections? Their family doctor was nonresponsive when this was questioned.

This problem re-occurred again upon receiving his 12 mo. shots. This time the doctor responded by attempting to say that this was normal.  Young Matteo’s face was reddened constantly, and his interactions were diminishing.  –Upon receiving his shots at 18 mos., their world and his changed drastically as he slept for one week straight.

This round had included the MMR vaccine.  Upon waking, Matteo would not eat and would only consume a half bottle of milk a few times a day.  His weight plummeted.  He stopped talking completely and did not look his parents in the eyes as he had always done. This was not only very frightening but also most angering as we had felt we had been deceived. Not quite certain just who? By the doctor, by the drug company or by the system?

A short time later still mystified by Matteo’s condition, his brother Alessio was born.  In keeping with protocols, he too was vaccinated and he to exhibited similar symptoms.  When lightning strikes twice in the same place, there is a reason.