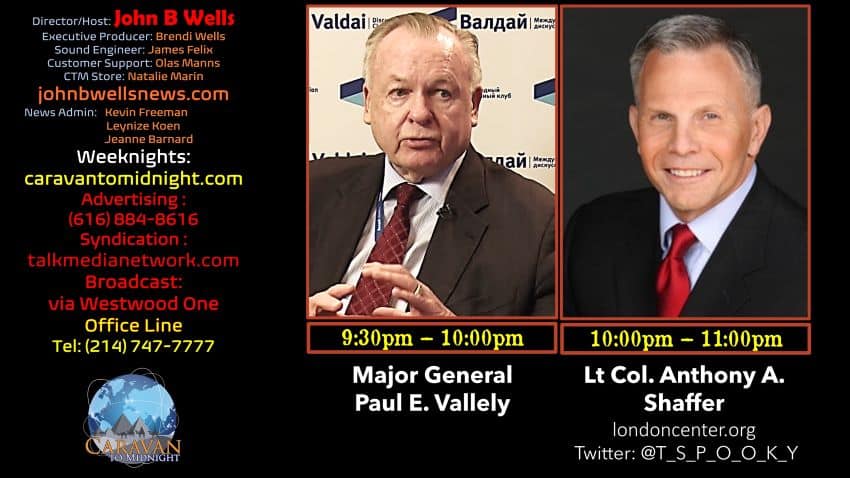 Paul E. Vallely, Major General, US Army (ret) was born in DuBois, Pa. He retired in 1992 from the US Army as Deputy Commanding General, US Army, Pacific in Honolulu, Hawaii. General Vallely graduated from the US Military Academy at West Point and was commissioned in the Army in 1961 serving a distinguishing career of 31 years in the Army. General Vallely is a graduate of the Infantry School, Ranger and Airborne Schools, Jumpmaster School, the Command and General Staff School, The Industrial College of the Armed Forces, and the Army War College. His combat service in Vietnam included positions as an infantry company commander, intelligence officer, operations officer, military advisor, and aide-de-camp. He has over fifteen (15) years’ experience in Special Operations, Psychological and Civil-Military Operations.
He served in many overseas theaters to include Europe and the Pacific Rim Countries as well as two combat tours in Vietnam. He has served on US security assistance missions on civilian-military relations to Europe, Japan, Korea, Thailand, Syria, Iraq, Kuwait, Turkey, Israel Indonesia, and Central America. He has served as a consultant to the Commanding General of the Special Operations Command as well as the DOD Anti-Drug and Counter-Terrorist Task Forces. He also designed and developed the Host-Nation Support Program in the Pacific for DOD and the State Department.
General Vallely has been a military analyst on television and radio. He is also a guest lecturer on National Security, international political, economic issues, strategic planning matters, and the Global War against Radical Islam and other threats to America. He and LTG Thomas McInerney authored the book, “Endgame” – Blueprint for Victory for Winning the War on Terror”. He was the senior military analyst for the Fox News Channel from 2001 -2008. General Vallely conducts an average of 4-6 national radio/TV show interviews per week and is well known for his published articles and talks on National Security and domestic issues.

He is the Founder of Nemo Arms Inc. of Kalispell, Montana, and is the Chairman of Stand Up America and the Legacy National Security Advisory Group. He has an extensive business background since retiring from the Army as a CEO of three different Corporations. He has also traveled five times into the Middle East in the past three years with his Middle East Liaison team. He co-chaired two delegation visits to Cairo and meetings with President El-Sisi and his staff. He is also a member of the Citizen’s Commission on Benghazi.
He and his wife, Marian, are the co-trustees of the Scott Vallely Soldiers Memorial Fund and reside in Montana. He and Mrs. Vallely are deeply involved in several humanitarian issues as well as supporting a multitude of community events and activities.

Lt. Col. Anthony (Tony) Shaffer (retired) is the President of the London Center for Policy Research, a New York Times bestselling author, and retired senior intelligence operations officer with 35 years of experience in military operations and national security. In his think-tank work, he is an advisor to senior members of the Intelligence Community, Pentagon, and key members of Congress.

He also works with National Geographic as co-Producer and Senior Advising Producer of the series Chain of Command – a program that documents the Pentagons’ successful effort to defeat ISIS during the first year of the Trump administration. In 2017 he became the Homeland Security Advisor to the Stafford County Sheriff’s Department in Virginia.
He was an advisor to President Trump’s 2020 Reelection Campaign.