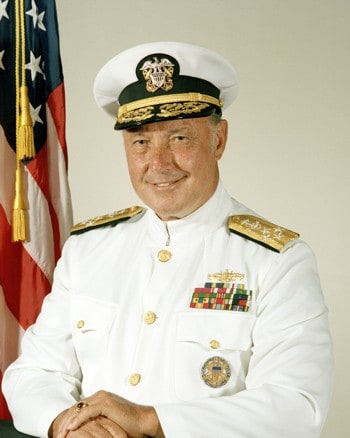 ADMIRAL JAMES “ACE” LYONS, JR., U.S. Navy Retired, is President/CEO of LION Associates LLC, a premier global consultancy providing technical expertise in the areas of international marketing and trade, enterprise risk including anti-terrorism site and port security, foreign policy and security affairs along with defense and commercial procurement. He has served as a member of the Board of Directors for several companies, including the Advisory Board to the Director of the Defense Intelligence Agency and was a consultant to Lawrence Livermore National Laboratory on issues of counter terrorism. Because of his political, technical and business management expertise combined with his strategic planning and operational achievements, he is personal advisor to key officials in private organizations in the United States and overseas. He is actively involved with Project Hope and other humanitarian efforts at the highest levels

of the U.S. government. Admiral Lyons is also Chairman of ESINC (Emergency Services Information Network Corporation) which provides HAZMAT information to over 2,000,000 first responders through dedicated communication networks, (NLETS, RISS) and through the use of Sprint/Nextel and now on Blackberry phones.

As an Officer of the U.S. Navy for thirty-six years, most recently as Commander in Chief of the U.S. Pacific Fleet, the largest single military command in the world, his initiatives contributed directly to the economic stability and humanitarian understanding in the Pacific and Indian Ocean regions and brought the U.S. Navy Fleet back to China. He also served as Senior U.S. Military Representative to the United Nations. As the Deputy Chief of Naval Operations from 1983 – 1985, he was principal advisor on all Joint Chiefs of Staff matters and was the father of the Navy Red Cell, an anti-terrorism group comprised of Navy Seals he established in response to the Marine Barracks bombing in Beirut. Admiral Lyons was also Commander of the U.S. Second Fleet and Commander of the NATO Striking Fleet which were the principle fleets for implementing the Navy’s Maritime Strategy. Admiral Lyons has represented U.S. interests with military and civilian leadership worldwide – including China, Japan and other Pacific Rim countries, the European continent and Russia. As Fleet Commander he managed a budget of over

$5.5 billion and controlled a force of 250,000 personnel. Key assignments preceding Flag rank included Senior Navy planner for the office of the Chief of Naval Operations, Chief of Staff, Commander Carrier Group Four, Commanding Officer, USS Richmond K. Turner (CG-20) and Commanding Officer, USS Charles S. Sperry (DD697). He has been recognized for his distinguished service by the United States and several foreign governments. He is a graduate of the U.S. Naval Academy and has received post graduate degrees from the U.S. Naval War College and the U.S. National Defense University.

Admiral Lyons has given numerous lectures, speeches and interviews nationally and internationally, including CNN, Fox News and Fox Business News. He also has written articles for the Naval War College Review and Naval Institute Proceedings along with other national and international journals. He is a regular contributor to the Washington Times.