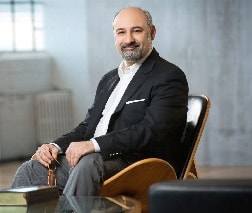 Ali Siadatan has a Masters Degree in French Language & Literature from the University of Toronto. Born in Iran, after the Islamic revolution of 1979 he was thrusted into a spiritual search which lead him to Jesus Christ and to faith in the Gospel.
In 1995 he began researching the UFO phenomenon and the relationship it may have to biblical history and prophecy. His research was intensified in 1997 after he had a close up UFO sighting in the deserts of Iran while visiting his father. In 2006 he released UFOs Angels & Gods his first documentary. It was a ground breaking work which received in a short time 270 thousand views on google video.

After building a successful urban outreach ministry and a business, getting married and having 2 children; Ali is now working on his second documentary titled : Goliath Rising and working on a fiction titled “ The School of Mysteries ” .

He is currently a teacher at the Rosh Pina Messianic congregation in Toronto Canada.

Ali has appeared on many American and Canadian radio shows.