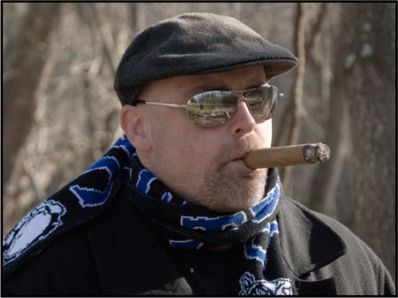 Instead, he got a real-life lesson in Spanglish and worked full time for a year at steel plant where he grew a strong appreciation for the working class lifestyle. It was in this time, while training for a natural bodybuilding competition, that he began his writing discipline. It took the form of daily journal excerpts and poetry entries and culminated in a series of self-published ‘zines’ of his writings.

In the late 90’s, he landed a slew of local spoken word performances throughout the college town of West Chester, PA before diverting his energies into singing in a hardcore punk band. During this time, he wrote freelance for a handful of music magazines including Rockpile and Chord.

Andrew’s writing then took a back seat for years as adult life took over. He got married in 1999 and three kids followed from there. Professionally, he decided that writing about music was not profitable enough to pave a path to sustainability for his family, so during a bout of unemployment, he maxed out his credit cards and created Thorp Records, a hardcore punk record label. Thorp Records steadily grew, until in 2006 he also started Sailor’s Grave Records to focus more on the sub-genres of street punk rock ‘n’ roll, Oi!, and psychobilly. Between the two labels he had released successful indie releases from world renown acts such as Blood for Blood, The Business, U.S. Bombs, Ducky Boys, Kings of Nuthin’, Madball, Koffin Kats, and Sheer Terror.

Andrew always felt a strong affinity towards the musical platform of punk rock because of its ability to allow one to express true feelings of pain and personal struggle. Additionally, he also steadily grew in his personal application of the conservative libertarianism philosophy, with an emphasis on the belief in maximum freedom short of anarchy. Though seemingly incongruent with a lifestyle marked by punk music and heavily tattooed skin, he also consistently approached all his endeavors with the backdrop of his personal faith in God.

Andrew also maintained a thread of a duel career in financial services. He worked for several years as a financial planner. From there, he then segued into the alternative financial service industry, in which he became part owner in a variety of entities serving the under-banked. He now does work as an operations analyst at an online commercial bank and owns several independent marketing and consulting firms.

In 2007, in the midst of struggling with his financial planning practice during the global financial crisis, Andrew did some soul searching. When he took inventory of his desires and ambitions and asked himself what he would do if money was not an issue, the answer was to write spy novels. So he decided to start working on that ambition regardless of circumstances.

After years of acquiring a strong, compulsive affinity for the genre of spy novels and geo-political thrillers, Andrew began weaving the beginning threads of what has now become Blaze: Operation Persian Trinity. The work and personal stories of authors such as Daniel Silva, Vince Flynn, Ted Bell, Brad Thor, Joel C. Rosenberg, and others helped to shape his style and inspire his writing discipline.

Andrew’s influences and interests are wide and diverse; from punk rock to country music; from traditional tattoos to traditional Christianity; from fine cigars to fine literature; from extreme physical fitness to enjoying a stiff glass of bourbon on the rocks; from conservative libertarian political thought to a fascination with studying eschatology; from Divine Providence to superstitious Irish Luck.

Andrew has three children and lives in the Philadelphia area.