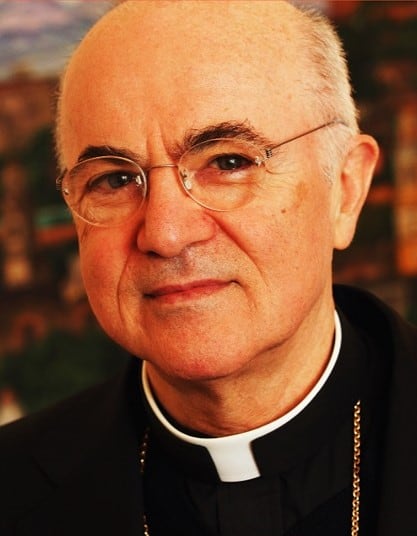 Carlo Maria Viganò was born 16 January 1941 in Varese, Italy. Viganò was ordained a priest on 24 March 1968. He earned a doctorate in utroque iure (both canon and civil law). He entered the diplomatic service of the Holy See in 1973, and worked at the papal diplomatic missions in Iraq and Great Britain. From 1978 to 1989, he held posts at the Secretariat of State. He was named Special Envoy and Permanent Observer of the Holy See to the Council of Europe in Strasbourg on 4 April 1989.

Carlo Maria Viganò an archbishop of the Catholic Church who served as the Apostolic Nuncio to the United States from 19 October 2011 to 12 April 2016. He previously served as Secretary-General of the Governorate of Vatican City State from 16 July 2009 to 3 September 2011. He is best known for having publicized two major Vatican scandals. These were the Vatican leaks scandal of 2012, in which he revealed financial corruption in the Vatican, and a 2018 letter in which he accused Pope Francis and other church leaders of covering up sexual abuse allegations against former cardinal Theodore McCarrick.

Viganò was ordained a priest in 1968 and spent most of his career working in a diplomatic capacity for the Holy See. As a priest, he served on a number of diplomatic missions before being consecrated a bishop by Pope John Paul II in 1992. Viganò was appointed Secretary General of the Vatican City Governatorate in 2009, where he reformed the finances of Vatican City and turned a budget deficit into a surplus. He complained directly to Pope Benedict XVI about financial corruption. The unauthorized publication of two of his letters led to the Vatican leaks scandal, exposing financial mismanagement and wrongdoing in the Vatican. He was then transferred to the position of Apostolic Nuncio to the United States in 2011 over his objections. While in the United States, Viganò earned a reputation as a conservative, arranging a controversial meeting between Pope Francis and former county clerk Kim Davis, known for her opposition to same-sex marriage, during the Pope’s 2015 visit to the United States. A priest accused him of suppressing allegations of sexual misconduct against Archbishop John Clayton Nienstedt, but he denied doing so.

On August 25, 2018, Viganò published an 11-page letter accusing Pope Francis and numerous other senior church leaders of concealing allegations of sexual misconduct against former cardinal Theodore McCarrick. Viganò stated that Pope Benedict XVI imposed sanctions on McCarrick in response to accusations that were made against him, but that Pope Francis refused to enforce them and that he made McCarrick an important advisor. Viganò called on Francis to resign. The letter provoked diverse reactions within the church, with some expressing support for the allegations and calling for further investigation and others defending Francis, questioning the statements made in the letter, and attacking Viganò’s credibility. After the publication of the letter, Viganò continued to issue public statements.