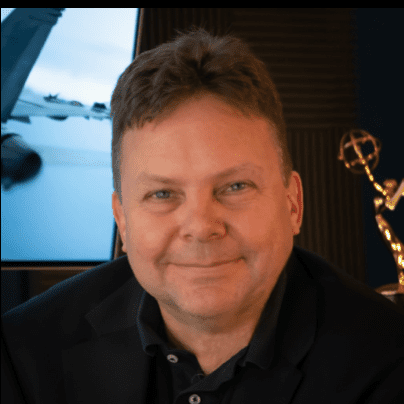 The short documentary film The Nimitz Encounters has approximately 4 million views since May 2019. The film documents and re-creates the UFO encounters by US Navy warships and planes during Nov 2004 off the coast of San Diego CA.

Helped with the research in the Nov 2019 Article in Popular Mechanics by Tim McMillan on the Nimitz case.

The Nimitz Encounters film features a culmination of David’s craft, including extensive use of 3D computer animation and graphics as well as electronic music and sound design all crafted by the filmmaker.

David’s Achievements in both documentary and entertainment programs:

Emmy Award for craft camera on The Travel Channel’s, “Waters Edge The Bahamas”, and in 1999 received a Emmy Award for editing of the

PBS documentary, “Children of the Fourth World”. In 2000 received the International Monitor Award for “Uncommon Friends of the 20th Century”. Cable Ace nomination for network programming includes Travel Channel’s “Freeze Frame” series and “Wildlife Encounters In Alaska” with Ali MacGraw, History Channel’s “Fireboats of 9/11” and “The Nazi Plan to Bomb New York”. In 2007 the Emmy nominated “Pope John Paul: A Saint for Our Times” for PBS and in 2008 Emmy Winning doc “Under the Sea With Al Giddings”. Produced the 2015 bio-epic “Queen of Swing” for PBS. Currently in production of the WWII Foundations APT films on D-Day at Pointe Du Hoc. Feature segments have appeared on Inside Edition, CBS, FOX, MLBnet, Animal Planet and Home & Garden Television just to name a few.