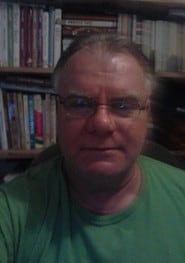 Born in LA, Ca., came of age in the rock n roll mid to late 70’s, was a high school drop out and a high school graduate, a college drop out and a college graduate ! Went through a readaholic stage in my 20’s and 30’s. Studied screenwriting for 7 years. Received private tutoring from a famous bible professor for 1 year straight to do a script about the rapture and tribulation only to learn that the rapture is most likely post trib, not pretrib and the script was mysteriously cancelled.

Moved around the country staying mostly in transportation. 7 years as a taxi driver and 15 years as a charter bus driver, constantly trying to start businesses on the side … failing in most cases but learning a little more each time.

I’m back to screenwriting now, ( working on a script about Civil War II, ) and wrote 4 Kindle books when I put the script on hold to see who would get elected, because that will play into the story.

The best and most serious of the books is : FALLEN SAINTS – The Mystery Of The World Solved, wherein I reveal an actual encounter with God … the main thing that stuck with me afterwards.