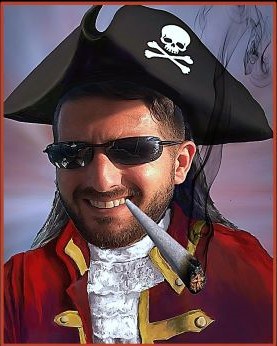 Dean Fougere is an Independent Researcher, live streamer, and video content creator. He has a BA in Political Science from Roanoke College and provide my own political analysis to the current world we inhabit. I have a constitutional view on politics and do not believe in the current two-party paradigm.

“I have a notorious online reputation as an internet pirate captain, leading a crew of unruly and much hated by YouTube digital riff raff. We explore the digital sea finding treasures during our deep dives that expose the New World Order Syndicate.

I am considered by many to be one of the best Epstein, PizzaGate, NXIVM, Finders, etc. experts around. I have broken multiple stories regarding Epstein and PizzaGate since 2012. I had 47k YouTube channel, an 11k YouTube Channel deleted at the same time during the Hunter Biden story, and then another channel I built up deleted during the Election nonsense. I am now building up my fifth YouTube Channel. I have written a fiction novel exposing the NWO. I have worked in the streets running March Against Monsanto Boston for two years and worked with and marched with Anonymous at Million Mask March for years. I am big on dlive, bitchute and hive.”