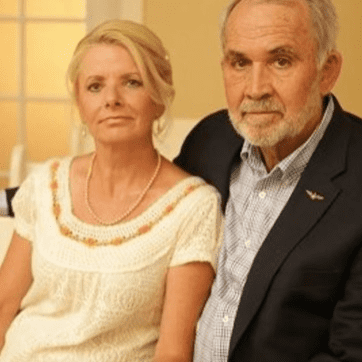 Denise was born in 1965 in Surrey UK to a mother and father from Northern Ireland who had emigrated to UK after her father, Sam, had served in the military.  She was the 5th of 5 daughters and was raised and schooled in Camberly which is located between London to the north and Farnborough to the south.  Farnborough holds a special place in the aviation history of the United Kingdom.  It was logical that Denise would develop an interest in aviation both commercial and military.

Following her public education Denise began her career as a “wireman”, Her occupation started with “on the job training” in a factory and she remained in that industry for 25 years +..  prior to her departing England in 2016 to begin her life with Field McConnell living in Wisconsin USA.

Her career in electronics had her working on catering equipment wiring where her interest in aviation was enhanced.  She had worked in electronics including wiring, printed circuit boards, cable looms and related projects.  At the end of her working life she was assembling and wiring state of the art television camera for industries in UK.

When on 8 March 2014 she read the headlines that a Boeing 777 operated by MAS, Malaysia Airline System, had gone missing on a revenue flight from Kuala Lumpur to Beijing China she began searching the internet to learn more of the incident with an intense interest in the automatic pilot installed on airliners of this vintage.  She focused her internet searches on two search terms: MH370 and autopilot.  Many if not most of her internet searches resulted in two names being found; Abel Danger and Field McConnell.  She located Abel Danger’s website and from their the Livestream shows that Field McConnell and David Hawkins were producing 2 or 3 times each week.  She became hooked on the information presented regarding MH370 and how it was linked to 9/11 and a series of similar events enabled by the Boeing Uninterruptible Autopilot, FADEC and the ATI; Air Tranquil Injector.

She became a constant listener to Abel Danger over the next 9 months and a member also of the “Campfire chat room” which was active during all Abel Danger Livestream shows.  In January 2015 she was listening to Field and David when she heard that Field would be attending and speaking at the British Constitution Group Conference at Telford UK from 27 February to March 3, 2015.  During that January show Field had noticed numerous UK citizens in the chat room and asked how best to get from London Heathrow Airport to Telford.

Denise was one of three Brits who responded with similar messages indicated all 3 were planning to attend the conference in Telford and that all three would be willing to pick Field up at Heathrow and drive him to Telford.

Denise provided a ride to the conference for Field and over the course of the weekend they found that they had similar interests and complimentary values.  Ten months later Denise traveled to the US to spend the Christmas Holidays with Field and they envisioned a life together which became a reality when on 15 June, 2016 they were married in Las Vegas, Nevada.

Their first Christmas together as man and wife was planned to be spent at her home in Frimley Green UK but those plans were interrupted as Denise was barred from entering the US after she had traveled to UK to await Field’s arrival a week after her own.  For 19 months Field and Denise were prevented from sharing their life at the Wisconsin farm where Field had lived since 2010. It was beneficial that Field had retired from a 31 year career as an airline pilot so he could travel back and forth at a very low cost.

On Friday the 13th of July, 2018 Denise received her long sought visa and Denise and Field traveled home together on Sunday, 15 July 2018 with hopes to never again be separated.  Denise and Field stay busy with Livestream shows and the writing of books in a series called SHAKE HANDS WITH THE DEVIL.  The book series is named in reference to the technology that followed MH370 from Kuala Lumpur to the point where the flight was electronically commandeered and redirect to a safe landing at Diego Garcia, an island in the South Indian Ocean.  From the point where MH370 was electronically commandeered to the safe landing, automatic “hand shakes” and downloads from the Rolls-Royce engines was plotting the progress of the flight which had never really, in truth, been missing.

Denise and Field will be at Operation CLASSIFIED in Dallas on Veterans Day Weekend. The topic of Field’s speaking opportunity is yet to be decided as there are so many significant events that most likely will occur between August and November 2018.