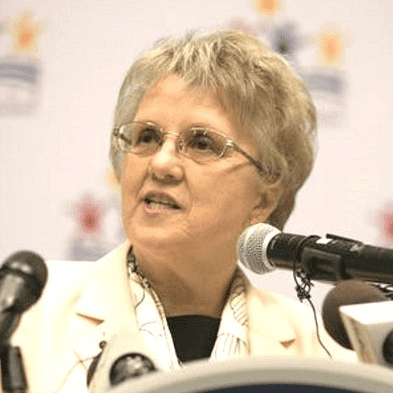 Diane Douglas is the former Arizona Superintendent of Public Instruction from 2015 – 2018.

Diane has always been passionate about the American education system and has been actively involved in Arizona’s education landscape for over twenty-five years. Her interest started with her daughter’s education and has continued with her grandson. She believes that God entrusts children to parents not to government bureaucracies no matter how “well intended.” Advocating and protecting parents’ rights to direct the education of their children has been one of her highest priorities throughout her years of service.

As the leader of the Arizona Department of Education, former Superintendent Douglas was devoted to improving education in Arizona so that all Arizona’s children have the opportunity to achieve their goals in life and contribute as successful American citizens. She believes the only way to accomplish this goal is to return education to its original purpose – the acquisition of knowledge through a classical education. To this end she attempted during her tenure to bring the Hillsdale Barney Charter School standards to all the schools in Arizona.

She has now turned her efforts to sounding the alarm about the government controlled, politically correct indoctrination of public schools and helping parents find true educational alternatives for their children. To that end, Douglas now serves on the educational advisory board of Public-School Exit.

She is proud to have served two terms on the Peoria Unified School District Governing Board (2005-2012), including two years as president (2008 & 2009). During her tenure she worked to advocate for students’ academic opportunities, parental rights and oversight of taxpayers’ dollars. She has also served on the Site Councils of two Peoria Unified schools; as well as on numerous of her churches’ boards and committees overseeing education programs.

Prior to her advocacy and leadership in education issues, Douglas graduated from Rutgers University and had a distinguished career as a financial expert for a variety of private sector firms. She is also a successful stained-glass instructor and artist with commissions in local homes and churches.