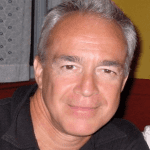 Doug Auld was born in Queens, NY. In his childhood, he had a love and fascination with nature and wildlife as well as mechanics. The son of a car dealer, he went to a trade high school and studied mechanics with the intention of taking over his Father’s Chrysler dealership. In his last year of highschool, his life’s course changed upon seeing “The Doors” perform at the Spectrum in Philadelphia, PA. He began studying piano and classical music, eventually writing 18 pieces of original music. His band “East Agony” played in several venues around the metropolitan area including the famous “CBGB” located in NYC.

Doug took up an interest in painting after visiting the “Salvador Dali Museum” in Cleveland, Ohio. Primarily self-taught, Doug pursued art and painting, eventually taking continuing education courses at the Art Student’s League, School of Visual Arts and The NY Academy in NYC. He presently lives, works and teaches in Hoboken, NJ.

Doug completed a three-year art project called “State of Grace.”, consisting of ten large scale portraits of adolescent burn survivors. The New York Times featured the project in a front page story of their “Metro Section” in June of 2006.

Doug was invited to Germany to paint Maha Schaff, a 28-year old female burn survivor from Cologne who was set on fire by her father. The painting and project was documented and featured on national television throughout Germany, Austria and Switzerland. The painting was unveiled to Maha at an opening reception held at the Fifty Fifty Galerie in Dusseldorf, Germany.

Most recently, Doug Auld painted 50 portraits of whistleblowers, bringing attention to individuals who have put their lives and reputation at risk by presenting controversial information to the public. By re-contextualizing their images as objects of art, the viewer is called towards a slower contemplation of who the individuals are.

Past highlights of Doug’s work include:

The release of ten new images of the Surreal Celebrity Portraits in Limited Edition Print which can be viewed at www.dougauldprints.com

1993 Absolut Vodka “Artist of the Year” original painting created for Absolut shown in publications through out the year.

One Man Show at The Bergen Museum of Art and Science, NJ, USA.

One Man Show at The Limelight, NYC, USA.