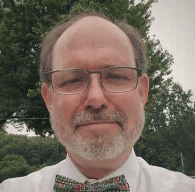 Dr. Frank received a B.A. in Chemistry from Westmont College in Santa Barbara, California. He qualified for his doctorate at the University of California, Santa Barbara before transferring to the University of Cincinnati in 1986 as part of the Ohio Eminent Scholar program. In 1990, he received a Ph.D. in Surface Analytical Chemistry. After graduating, he formed “ADAM Instrument Company, Inc.,” named for the new surface analysis technique he discovered during his graduate studies. The “ADAM” technique brought him international acclaim, and his work was featured in several scientific books and international journals, including cover articles in Science and Naturwissenschaften. He has over 50 scientific publications, and is internationally regarded as an expert in Auger spectroscopy.

Dr. Frank’s scientific reputation gained him introductions to several U.S. companies, where he learned to apply his scientific and computer expertise to real-life research and development challenges. He specializes in the development of custom control and analytical solutions, and has invented several instruments for surface optical characterization, precision force application, and soil analysis by means of portable electron microscopy and spectroscopy.

Dr. Frank’s scientific, electronic, instrumental, and software expertise make him an asset in situations requiring systems integration. His combination of skills makes him especially suited for the preparation and development of ‘intelligent’ user-friendly software that allows straightforward operation and control in complicated manufacturing and analytical environments. Sometimes, he is retained to provide only the intelligent software ‘glue’ that holds an integrated system together. Other times, the broader resources of PAI are brought to bear, allowing a prototype design and development solution to be expedited.