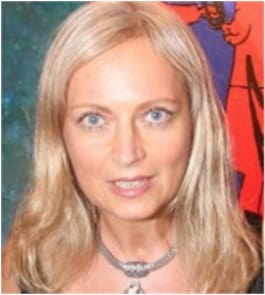 Irene Caesar (born September 10, 1963) is a Russian-American philosopher, scientist and conceptual artist, Colonel of the International Irkutsk Cossask (Kazak) Military, Ataman of the Cossack / Kazak Embassy in the US, awarded the Medal “For Faith and Service to Russia” (2015), President at Wave Genome (from 2010), CEO at Matrix City LLC (from 2012), contributing Editor to the Socialist Factor Magazine (Lucknow and London), co-founder of the Kazak-TV (cassak.tv) Information Agency (2015; published in every Yearly Issue of Maintenant, A Journal for Contemporary DADA Writing and Art by Three Rooms Press in New York. Dr. Irene Caesar was the first scientist and entrepreneur, who commercially offered the remote management of biosystems via laser signal (2013), the bioelectronic drugs as digitized bioholograms recorded by laser, and chips / psi-generators structured by laser with digitized bioholograms, ahead of Google R&D program for the bioelectronic drugs for 7 years of successful global sales and more than 50 years beyond R&D.  Irene Caesar was the first artist who applied laser of the Institute of National Security in Russia to encode her art images with the digitized holograms (2013) via lasers, and who for the first time in the world, had transmitted the digitized hologram remotely via the laser as a piece of art (2014).