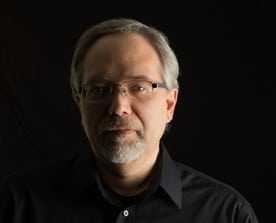 Dr. Michael Heiser (Mike) is originally from Lebanon, PA. He and his wife Drenna married in 1987. They have four children.

Mike taught on the undergraduate level for twelve years, six of which were in Christian colleges. He currently teaches for Liberty University’s distance education program. He has taught over twenty different courses covering both testaments, systematic theology, ethics, and biblical languages. He also taught world civilization for five years through Marian College in Fond du Lac, WI, and public speaking at the University of Wisconsin-Madison.

He is currently a Scholar-in-Residence for Faithlife-LOGOS. There, he is responsible for targeting and evaluating potential data projects for scholarly products, overseeing existing academic projects, and the creation of written content. Mike’s varied academic background enables him to operate in the realm of critical scholarship and the wider Christian community. His experience in teaching on the undergraduate level and writing for the layperson contributes directly to the company’s goal of adapting scholarly tools for non-specialists.

Mike has an active ministry of writing, public speaking, and guest appearances on numerous radio programs. He addresses issues of the occult, paranormal, and esoteric beliefs, from a Biblical worldview.