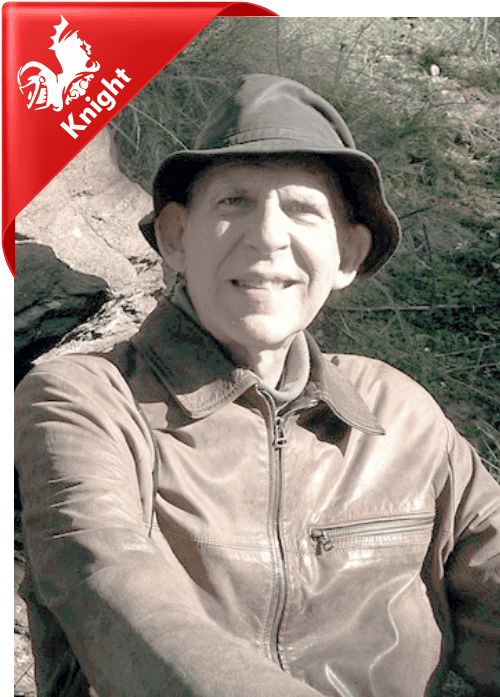 Has been president of the Starburst Foundation since 1984, where he has conducted interdisciplinary research in physics, astronomy, geology, climatology, prebiotic evolution, SETI, psychology, and anthropology. He received his BA in physics from Johns Hopkins, his MBA from the University of Chicago, and his Ph.D. in systems science from Portland State University. After conducting occupational safety research at Harvard University, he invented and patented an improved rebreather apparatus. He has conducted solar desalination research for the state of California, solar energy consulting for the Greek government, and also had consulted Hughes Aircraft Corp. on ways to improve company innovation. In 1993 he reverse engineered the B-2 bomber’s classified propulsion technology and later disclosed and explained the microwave beam technology developed in the super secret Skyvault Project for spacecraft propulsion. He is the originator of the subquantum kinetics, a unified field theory that could replace the current physics paradigm.  He is also discoverer of the galactic superwave phenomenon, the notion that cosmic ray outbursts from the galactic core periodically trigger major shifts in the Earth’s climate. In testing this theory he became the first to discover high concentrations of cosmic dust and gold in ice age polar ice.  More recently he has shown evidence that about 50,000 years ago Earth was showered by a major influx of superconductive tin-rich interstellar dust particles. He also has shown evidence that a extreme solar event may have been the cause of the Pleistocene mass extinction. He is author of six books, which include Secrets of Antigravity Propulsion, Genesis of the Cosmos, Subquantum Kinetics, Earth Under Fire, Galactic Superwaves, and Decoding the Message of the Pulsars.

Additional information:  Dr. LaViolette’s findings open a new doorway to the interpretation of our ancient past.  Aided by his background in general system theory and physics, he was able to successfully decipher the lost science said to be encoded in the lores of the Tarot and astrology.  He has found that the first 11 major arcana of the Tarot and the 12 signs of the zodiac both use symbolic metaphor to present an advanced science of matter and energy creation.  He has also found this same advanced creation science is metaphorically encoded in creation myths from ancient Egypt, Greece, Mesopotamia, India, and China.

Also he has discovered the scientific significance of ancient Egyptian symbols such as the ankh, djed pillar, tyet, and aker sphinx; and of the Hindu symbol of Shiva Nataraja.  He also has found new evidence embedded in an ancient Egyptian text that supports the belief that ancient Magi performed initiation rites into the Osirian mysteries by entering an underground labyrinth symbolically accessed through the breast of the Sphinx.  Furthermore, in the area of archeology and archaeoastronomy, Dr. LaViolette is the first to discover and decode a scientifically advanced time-capsule message concealed in the lore of the zodiac and which utilizes a cryptographic key-and-check mechanism to facilitate cross-cultural transmission of its encoded knowledge. He found that this cipher describes the Galactic and solar cause of the legendary global catastrophe that decimated civilization at the end of the last ice age and that gave rise to numerous myths about the darkening of the luminaries, burning of the Earth, and occurrence of a great flood.  He discovered that it relates how an intense volley of cosmic rays, explosively emitted from the center of our Galaxy, had bombarded our solar system and pushed in light occluding particles of cosmic dust.  This ancient scientific record inspired him to carry out an extensive program of interdisciplinary Ph.D. research to search for corroborating evidence.  His findings were later published in refereed scientific journals.  As such, Paul LaViolette may be the first to conduct doctoral research for the purpose of checking out the validity of scientific information conveyed by a prehistoric time-capsule message.

He is the first to decipher the 14,000 B.C. date encoded in the Scorpius-Sagittarius zodiac constellations and in the Dendera ceiling zodiac.  Also he is the first to work out the significance of the 10,750 B.C. date encoded in the Giza pyramid complex, the Beth-Alpha Synagogue mosaic, and in the ancient Greek myth of Astraea.  His work has provided new understandings of the ancient Minoan bull-leaping ritual, the Pleiadean rites, and significance of myths connected with the Orion constellation.  In addition, he has provided new insights about the constellations of Scorpius, Sagittarius, Sagitta, Centaurus, and Taurus.  He is also the first to decipher the astronomical significance of the South American Indian Barasana cosmology which refers to cataclysms caused by the Galactic center.  Furthermore, he has elucidated the astronomical and geological significances of:

* the Hopi legend of the Blue Star,

* the ancient Egyptian myths about the punishing Eye of Atum-Re, the vengeful Eye of Horus, Horus’ nearly fatal scorpion sting, and the battle between Horus and Set,

* the ancient Greek myth of Phaethon and the Sun Chariot and Plato’s story of Atlantis,

* the Mayan Popul Vuh creation myth about the Heart of Heaven,

* the Nordic legend of Ragnarok about the death riders of Muspell and the Sun-swallowing Fenris Wolf,

* the Yurucare Indian conflagration legend, and many others.