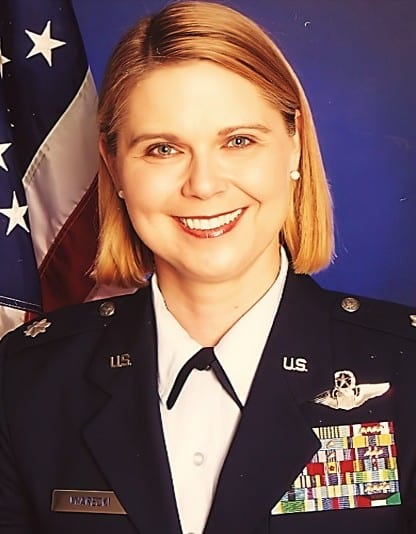 Dr. Sandy Miarecki has just been fired from the Air Force Academy, in Colorado Springs, CO, for fighting against the illegal mandates in the military. Please donate to support her legal defense fund and to fund scholarships for the cadets and cadet candidates that are leaving the Academy to pursue their education elsewhere. Even with everything that has happened to her, she is still helping everyone (cadets, students, active duty, federal civilians, federal contractors, Guard, Reserves, and private citizens) to fight the mandates.

She is a retired Lt Col and Air Force Test Pilot (with an extensive biography, see below) who takes her oath to protect the Constitution very seriously. She retired from the Air Force in 2007 and completed a Masters and PhD in particle physics before being hired as a federal civilian in 2016. She has been helping the cadets and students around the country with their religious exemptions and appeals, but many of these hard working and talented young adults are being forced out. “Ma’am, are they going to force me onto the ground to inject me?” one of the cadets asked her, as illegal coercion is clearly one of the tactics being used by the military. The cadets and students have told Dr. Miarecki that they feel alone and despondent. These cadets and students have worked so hard to get where they are, but obviously even their impressive credentials are not enough to give them the right to choose to not be injected with an experimental genetic therapy. Even though Comirnaty and SpikeVax have been FDA “approved”, neither of these injections has been available even to this day. Which means that every person who has taken the injections has taken received an EUA injection and therefore has volunteered for the biggest human experiment in history.

Dr. Miarecki could have applied for a religious exemption or medical exemption, since she qualified for both. It would have been easier, but she refused to give ANY authority to the illegal mandates or the criminals pushing them. She is fighting for the rights of EVERYONE, including those that took the injections and/or are agreeing to the testing.  The right to control our own bodies was given by God, and this right was reinforced with the Nuremberg Code. Dr. Miarecki is taking the arrows for her students and those that seek help from her.

Sandy was born in Chicago and raised in northern Illinois. She was the valedictorian of her high school class and then attended the University of Illinois-Urbana. Her dream had always been to be an astronaut. She received her degree in astrophysics and completed the Air Force ROTC program where she served as Cadet Commander. After graduation, she attended pilot training in Lubbock TX and remained there as an instructor pilot in the T-37. She hoped to fly the F-16 someday, but she was 1 year too early for a woman to be allowed to fly combat aircraft. Her next assignment was in the C-141 cargo aircraft in Tacoma WA, flying worldwide missions which included operations in the first Gulf War. She was injured by a vaccine in 1992 and began experiencing declining health. She was selected for the Air Force Test Pilot School at Edwards AFB, graduating in the summer 1996. Her test pilot assignment was flying the B-52, mainly testing and certifying the new GPS-based weapons that made their debut during the first Gulf War. Next she went to the Air Command and Staff College in Alabama for one year, at which point the Air Force experienced a pilot manning crisis and recalled many pilots to fly operationally. She went to Travis AFB in Fairfield CA to fly the C-5, the largest aircraft in America, where she also directed the Travis Air Show in 2000. She then worked at the headquarters of the Air Education and Training Command in San Antonio TX, where she was the 19th Air Force Chief of Safety, overseeing the safety programs of 21 bases and 30,000 personnel. She was also a T-38 instructor pilot, teaching the teachers at the schoolhouse at Randolph AFB. Her final assignment was at Brooks AFB working in the Human Systems Wing on human factors and cockpit design. She retired in 2007 with 3800 flying hours in 45 different aircraft. Because of health issues, she transitioned to a non flying career. She was accepted to the University of California-Berkeley where she completed her masters in physics and then her PhD in particle physics, specifically neutrino astrophysics. When a teaching position opened at the Air Force Academy, she applied and was accepted in Jan 2016. She taught physics at the Academy for 4.5 years before transitioning to the Academy Preparatory School, running the physics program for the Prep students whose goal is to attend the Academy after a year of extra studies.

Dr Miarecki was interviewed on David Broadhurst’s internet radio, and her story can be heard here: https://youtu.be/LWEu_5DoSG0

In addition, The Epoch Times published a story about her fight against the Academy: