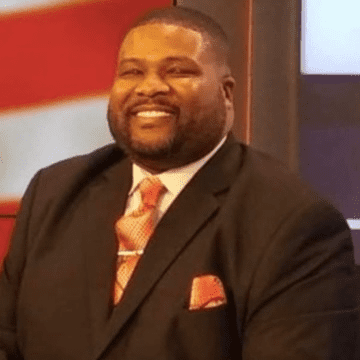 Edward Cage was born in St. Louis, Missouri and raised on the city’s North Side. Edward couldn’t read until he was twenty years old. As he taught himself to read and write, he wanted more for his family. As his reading became better, politics and social issues became a favorite topic. Edward started to debate with friends, family and anyone that would converse with him. Edward is a co-founder of Enter- In Media, Conservative Activist, Minister, Public Speaker, and Artist. Edward has appeared as a round-table member on radio shows such as Cowboy Logic Radio, and Urban Family Talk- Lion Chaser with Lonnie Pointdexter, He has appeared numerous times on the Rick Amato Show and Dr. Gina Show with Gina Gentry Loudon. He was a guest speaker at the TRUTHFEST 2014. He is well known throughout the United States for his stance on Conservative Issues. Edward is due to release his first book in the Fall of 2018 titled I Am America. In the summer of 2015 Edward’s daughter Nicole uploaded a video of them beat-boxing. The video has received well over One hundred and sixty million views. They’ve been seen on ABC’s Good Morning America with Michael Strahan, The Steve Harvey Show, The Late Late Show with James Corden, The Pensado Awards and TED YOUTH.

Mr. Cage still speaks out against political injustice while sharing the entertainment spot light with his daughter Nicole Paris.