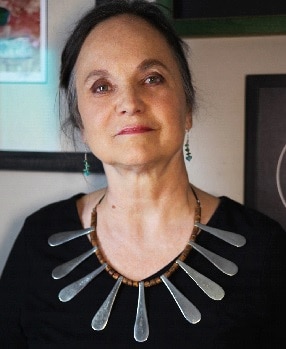 Over the years, Elana Freeland has been a Waldorf school pioneer, teacher, lecturer, storyteller, and writer. She has written for alternative publications, edited the stories of survivors of MK-ULTRA and ritual abuse, and ghostwritten books on diverse topics. Her second major in college was biology. In 1996, she was awarded a Master of Arts in Great Books and honors for her thesis on historiography at St. John’s College in Santa Fe, New Mexico.

Freeland has self-published a fictional American history series called Sub Rosa America about the “deep politics” behind the downfall of the United States since John F. Kennedy’s assassination.

In June 2014, Feral House Books released Chemtrails, HAARP, and the Full Spectrum Dominance of Planet Earth, the book that connects how the chemical aerosols whiting out our skies and ionospheric heaters around the world work together to assure seven major military operations of global control.

In October 2014, the Australian magazine Nexus published her article on invasive electromagnetic weapons, and now she has begun the sequel to Chemtrails, HAARP, and the Full Spectrum Dominance of Planet Earth about the next operation to be served by global chemtrails-ionospheric heater technology: the Space Fence, a world Smart Grid enabled by the ionized atmosphere we now breathe. Inside the electromagnetic lockdown of the Space Fence, humanity is to be neurologically herded toward a Transhumanist future.