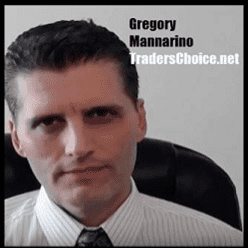 Also known as “The Robin Hood Of Wall Street,” my name is Gregory Mannarino. I am an active/full time trader of the capital markets with a world-wide following.

Born on July 22, 1965, I became interested in “Wall Street,” like many others at the time, in 1987 after seeing the movie Wall Street with Michael Douglas. Around that time I was able to get an entry level position, then subsequently to the trading floor, at the now defunct bank Bear Stearns, but within a relatively short time realized that working on Wall Street was not like the movies and moved on. I went on to get a medical degree and practiced medicine as a Physician Assistant beginning in 1996, now retired from practice. I also served in the United States Naval Reserve Medical Service Corps, having attained the rank of Lieutenant. I even published a book on casino Blackjack strategies years later, and was banned from playing the game in Las Vegas casinos.

Since that time I have published several books pertaining to finance, global economics, and equity trading.

I am the creator of The Evolution System, a cutting edge technical trading system which is light years ahead of any other trading system ever created. “Options Trading: A Simple, Effective Way To Hedge Your Trades. Includes A New Technical Trading System.”
I publish several very popular financial blogs including one on Steemit, and a YouTube channelwith tens of thousands of subscribers from all over the world.

I have been (and continue to be) interviewed by some of the best in the business (Zero Hedge) (Greg Hunter USAWatchdog) (Alex Jones INFOWARS) (The Pete Santilli Show) (FutureMoney Trends) (Caravan To Midnight With John B Wells) (SGT Report) and many others.
I have been published on virtually every financial site on the web., and I am very proud to say that I have many thousands of loyal followers worldwide.