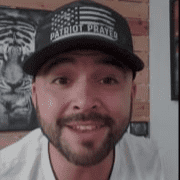 Joey Gibson is the Founder of Patriot Prayer. His organization has been at the forefront of multiple confrontations with “Rose City Antifa” in Portland, Oregon.

Joey Gibson has been unfairly politically targeted and charged with felony riot for standing on a sidewalk, recording happenings outside of a Portland bar, and subsequently being repeatedly assaulted by Antifa.

Gibson did not even exercise his right of self-defense while being assaulted, as he has a belief and policy of 100% non-violent resistance. Mayor Ted Wheeler, along with the corrupt establishment in Portland, continues to protect Antifa, while trying to publicly and legally destroy outspoken Christians who exercise their freedom.