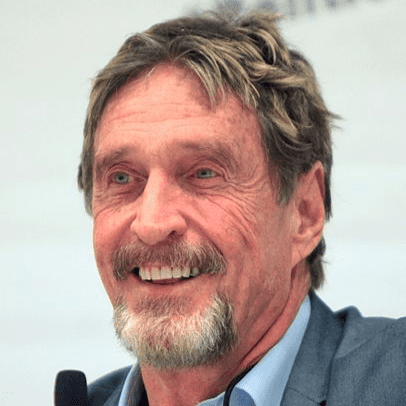 John McAfee is an information security pioneer who founded the global computer security software company McAfee. A highly influential figure in the field of computer security, he is a world renowned expert on internet surveillance, global hacking scandals and threats, and personal privacy online.

McAfee was employed as a programmer by NASA’s Institute for Space Studies in New York City from 1968 to 1970. From there he went to Univac as a software designer and later to Xerox as an operating system architect. In 1978 he joined Computer Sciences Corporation as a software consultant. He worked for consulting firm Booz Allen Hamilton from 1980-1982.[5] In the 1980s, while employed by Lockheed, McAfee received a copy of the Brain computer virus and began developing software to combat viruses.

John is the Founder of McAfee Associates, a computer anti-virus company which he later sold. His other business ventures include Tribal Voice and QuorumEx. In 2016 John ran for U.S. President as a member of the newly-formed Cyber Party.

Today John has thrown his hat in the ring again for the 2020 General Election, running on a platform of individual liberty and government accountability. He is also a pioneer in the world of cryptocurrencies and launched Magic as cryptocurrency alternative to Bitcoin.