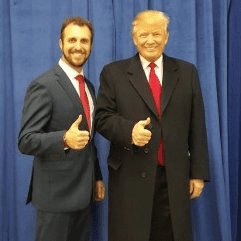 Following his honorable discharge from the Navy, Joshua had the same experience as every transitional Veteran – he was a hardworking veteran with a strong résumé but no job.

Now, as an expert in business systems and Veteran housing, with over four generations of family involved in real estate, Joshua is an experienced and creative housing crisis problem-solver.

In addition to 16 years of grassroots, faith-based, and nonprofit service,  Joshua founded Vets For Trump in 2016 to insure the Veteran Voice was heard. In fighting the homeless housing crisis Joshua’s contributions started by volunteering as a Project Manager with the 2011 Virginia Beach Extreme Home Makeover project.
Continuing as Co-Founder of Veterans Homefront whose team was honored as a key instrument in the 100 day governor challenge in 2014.  This success allowed Virginia recognition to be the only one to reach functional zero in Veteran Homelessness.  Most recently Joshua was honored to be designated as Chairman of the Veterans For Trump Coalition growing with his team the largest Veteran Coalition seen since JFK around a President.

Joshua spends his days speaking to business owners, congressmen  and women, cabinet members and their policy makers alike.  Working with the Vets For Trump team he maintains communication with 500,000 grassroots Veterans asking for change in their backyard through numerous Social Media outlets and websites.  Alongside 2nd District Congressman Scott Taylor Joshua looks to create jobs supporting the DOD as well as our Veteran Communities. As a Bio-Technology innovator Joshua continues on his track for PhD in Industrial and Organizational Psychology working on projects in B.C.I (Brain Computer Interface).

As a father of three young boys, Joshua believes in modeling philanthropy and has devoted his time to creating housing solutions across the country. He hopes to set an example, for both his sons and others in the community, by establishing a legacy of Veteran housing assistance, Veteran Activism, Technology and Social Integration.