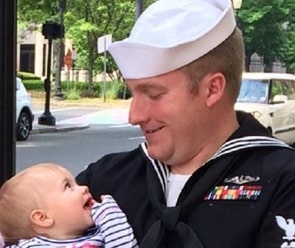 Kristian Saucier is the US Naval Machinist Mate who was serving on the nuclear powered attack submarine USS Alexandria in 2009 when it was in port in Groton, Connecticut. While there he took six cell phone pictures for his family to illustrate the work he did in an area that was restricted from photo taking. Years later this cell phone was found and the photos discovered. Aside from this somewhat common infraction often punished by being demoted to a lower pay grade and rank, Kristian had served honorably with high praise from his superiors as an important and skilled member of the US Nuclear Navy’s elite submariners corp. During the 2016 presidential campaign the civilian court decision to sentence Kristian to nearly a year in prison became a national topic when Donald Trump contrasted Saucier’s harsh punishment to the non punishment that Hillary Clinton enjoyed after having even beyond top secret communications and dozens of classified ones on her private (and highly hackable) server accessible with her cell phones. Kristian now faces life without an honorable discharge; the likelihood that he will never be given security clearance and has suffered vehicle re-possessions and foreclosure on his home. The Clinton’s meanwhile, could afford to purchase a second house in tony Chappaqua, New York and Hillary Clinton could freely look forward to becoming President enjoying access to the most top secret and sensitive communications imaginable. Kristian Saucier is now outfitted with an ankle monitor, which he must wear for 7 months.