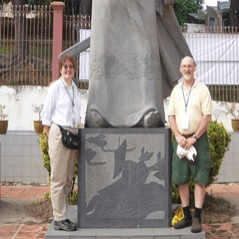 “To the Gates of Fengtu”, “Chasing Dragons, the true history of the Piasa” (with Mark Nickless, spouse)

Daughter of a USAF Captain, Laurie grew up on Air Force Bases around the US. Around the age of seven, Laurie fell in love with the lore and legends of Asia. She would go on to college where she earned degrees first in film making and later in television production. Actively pursuing a career as a free-lance writer and artist, Laurie eventually met & married her husband Mark Nickless, and thereafter spent several years working as an outdoor journalist and webmaster. All of this has added up to lead to what she is doing now, delving into some of the greatest unsolved mysteries of North America and the world, both the destruction and disappearance of one of the greatest civilizations of the Americas at Cahokia, and the abrupt, xenophobic retreat of Ming dynasty China inward from where it stood on the verge of becoming a world power. Her investigations into a largely forgotten manuscript from 1587 will forever change how we view the history of the Americas and that of the world before Columbus.