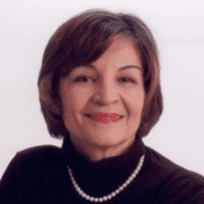 During the Iranian Islamic revolution, Manda witnessed the execution of many innocent people, including her high school principal who was murdered because she was a woman and the Secretary of Education. She bore witness as her homeland pushed backward to crude 7th century Arabian standards. And she witnessed the effect.

Having been educated in the United States, in 1979, she was the managing director of department of statistics and international affairs at the Customs Administration in Iran. She came to United States as a political refugee in 1980, became a citizen three years later, and began her fight for human rights in Iran. She is the founder and president of the Alliance of Iranian Women, a group which has deep connections within the Iranian diaspora and within Iran.

Ms. Ervin is frequently consulted by Members of Congress and has testified in Congressional briefings, the Helsinki Commission, and the United Nations. In February of 2008, Ervin was appointed as the United States’ Delegate to the United Nations’ Commission on the Status of Women. Ervin was the featured speaker at the G8 Summit on Violence against Women in 2009. She received the EMET Speaker of the Truth award in 2012.

Ervin has been published by the Hudson Institute, American Thinker, Washington Times and many others. She frequently speaks on human rights and Middle East history.