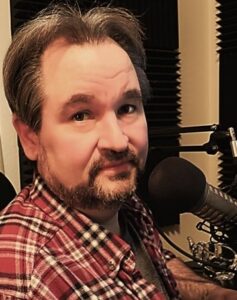 Mark Anderson spent over 20 years in writing and book publishing. He spent much of that time as a “book doctor” (aka, a developmental editor), working directly with authors to improve their writing. He also spent time on the other side of the publishing transom as an editor and assistant publisher. That experience led to a couple of years in the film industry as a screenwriter, executive story editor, location manager and associate producer. After watching two film companies struggle, thinking there must be some way for these small companies to make it, he returned to higher ed and picked up his MBA. He is all but dissertation on his doctorate in business administration.

In 2011, after Oregon bucked the national trend and went blue rather than red, he and his wife, Karla Davenport, were determined to bring better information to Oregon. Mark is the host of the I Spy Radio show, heard on 7 terrestrial AM radio stations around Oregon and anywhere via the stations’ live streams. I Spy Radio: Keeping an eye on Big Government. Also, it should be noted that the I Spy Radio show carries both Caravan to Midnight and Ark Midnight on KFIR 720 AM in Albany, Oregon.