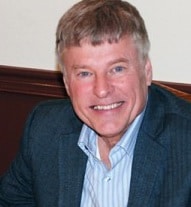 Merlin L. Miller was born and raised in Des Moines, Iowa, and graduated from the United States Military Academy at West Point, NY. He served several years in the U.S. Army where he commanded two units and then worked as an Industrial Engineering Manager for Michelin Tire Company. In 1983, he was accepted into the University of Southern California’s “Peter Stark Motion Picture Producing Program,” graduating in 1985 with an MFA degree in Cinema/Television. He subsequently became an independent screenwriter, motion picture producer/director, and instructor.

In 2007/8, Merlin became politically active – in support of Ron Paul’s Presidential campaign. In 2012, he was recruited by a small independent political party to be their Presidential candidate. During the course of campaigning, Merlin appeared in numerous radio, television and print interviews, wrote “Our Vision for America”, and visited Iran – meeting with President Mahmoud Ahmadinejad.

Merlin plans to produce “False Flag”, a critically important motion picture, and help build a coalition of nationalist, populist, and patriot organizations. United, this coalition could end the pervasive political corruption of a controlled two-party system, and help restore America’s traditional goodness – as a freedom-based, constitutional republic. This political effort has led to formation in 2015 of the American Eagle Party – “the UnParty”” for we-the-people! Information can be found at http://americaneagleparty.com/

In 2015 Merlin and his wife visited Russia, and in November was awarded the “Global Peace Award” by The Foundation to Defend the First Amendment. His controversial and comprehensive “Eagles Are Gathering” (2016) has just been published by the American Free Press. Merlin has been married for 41 years to Susan, and they have 4 grown daughters, three of whom also graduated from West Point and are serving the nation.