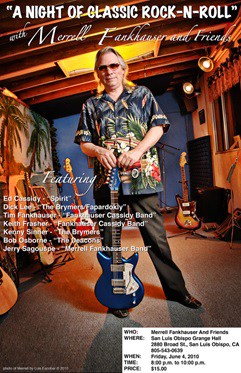 Calling from a Star

Merrell Fankhauser is best known for writing the rock instrumental, classic “Wipe Out,” but he should also be recognized as a pioneer in the surf and psychedelic folk rock genres.  For over 50 years, Merrell has achieved international success by displaying unparalleled musicianship and insightful lyrics on spirituality and the paranormal.

Merrell has also been a lifelong explorer and has delved deeply into the lost continent of Mu and UFOlogy.  Since 2001, he has been the host of his TV music series “Tiki Lounge.”  He recently chronicled his legendary career in his autobiography “Calling from a Star.” His most recent CD is “Signals from Malibu,” based on the mysterious underwater sounds recorded near the Dome off the coast of Malibu.