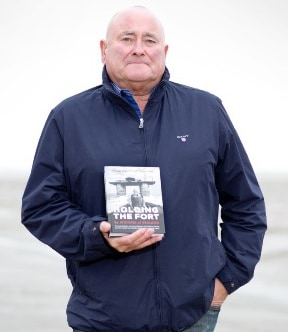 During the Second World War the British government built several Fortress islands in the North Sea to defend its coasts from German invaders. These forts were built illegally in international waters.

One of these Fortresses, consisting of concrete and steel construction, was the famous royal fort Roughs Tower situated slightly north of the estuary region of the Thames River. In contrast to the original plan to locate the tower within the sovereign territory of England, this fortress was situated at a distance of approximately 7 nautical miles from the coast, which is more than double the then applicable 3 mile range of territorial waters; to put it briefly, this island was situated in the international waters of the North Sea.

The forts were abandoned in the early 1950’s and whilst built in international waters in a time of world crisis, they should have been pulled down to comply with international law. Except for the aforementioned fortress, the fortresses were subsequently pulled down. This resulted in the portentous uniqueness of the fortress. Fort Roughs Tower, situated at the high seas, had been deserted and abandoned, res derelicta and terra nullius. From a legal point of view, it therefore constituted extra-national territory.

THE BIRTH OF SEALAND

In 1966 Roy Bates a former infantry major in the first battalion Royal Fusiliers whose regimental headquarters strangely enough was the “Tower of London” decided to take over the fortress. It was Christmas Eve 1966.

Roy smarting from a legal battle with the British government over his offshore radio station “Radio Essex” which had broadcast from another abandoned fortress that was found by the British courts to be within UK jurisdiction. These stations were known affectionately by the press as “Pirate” radio stations and were much loved by the British public as they supplied everything that the BBC did not at the time, Pop music and amusing presenters.Roy never did bring his radio station back to life but instead after taking much advice from his lawyers had the idea to declare this fortress island the independent state of “Sealand”. Claiming “Jus Gentium” over a part of the globe that was Terra Nullius.

2nd of September 1967 along with his son Michael (14), daughter Penelope (16) and several friends and followers Roy declared The Principality of Sealand raising a newly designed flag and making his beautiful wife “Princess Joan”. It was her birthday and Roy gave her the best and most romantic present he could think of the title of Princess.

It was not long before the British Government decided they could not have what ministers described as a possible Cuba off the east coast of England. They sent the military out to destroy other forts that were left in international waters. The Bates family looked on as huge explosions sent the massive structures hundreds of feet in the air and debris floated past for days.

Helicopters that had carried the explosives buzzed above and the navy tug carrying the demolition crew passed close by and shouted “You’re next!”. A while later a government vessel passed close by its crew shouting threatening obscenities at Michael and his sixteen year old sister. Warning shots were fired across the bow of the boat and it raced away towards the UK.

Since Roy was still a British citizen a summons was issued under the fire arms act and on the 25th of November 1968. Roy and Michael were in the dock of the Crown court of Chelmsford assizes in Essex. There was much argument and laws going back to the 17th century were called upon. During his summing up the judge said “This is a swash buckling incident perhaps more akin to the time of “Sir Francis Drake” but it is my judgment is that the UK courts have no jurisdiction.” This was Sealand’s first de facto recognition.