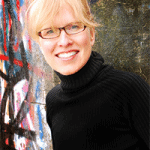 The author of the Security Through Absurdity series which was voted BEST NEW SERIES of 2014 on goodreads.com.  Her books are inspired by her real life experiences working for a major US defense contractor, her dealings with national news outlets, and her involvement with a US presidential campaign.  The books are currently included in the public high school libraries in Rhode Island and Connecticut.

Rachael L. McIntosh has a degree in fine art.  She graduated from Massachusetts College of Art and Design and through a twist of fate ended up working for one of the nation’s “big six” defense contractors during the lead up to the Iraq War.

She has since acted as a national media coordinator during the politically significant December 16, 2007 “Ron Paul Money Bomb”, an online fundraising frenzy that became the largest single day fundraiser for any political candidate in US history.  She was an elected Alternate Delegate for Ron Paul from the state of Rhode Island at the 2012 Republican National Convention in Tampa, Florida.

Ms. McIntosh as has also appeared in the feature-length documentary, For Liberty. Currently, she is writing novels and homeschooling her two children in Rhode Island.