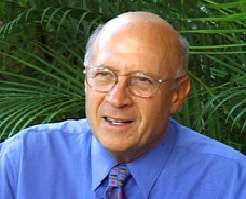 – Whatever Happened To Raoul Wallenberg?

In 1993 Morris Wolff received the United Nations Peace Award for Humanitarian Service at Carnegie Hall. In 1983, along with Rosa Parks, he was awarded the National Council of Christian and Jews annual award for humanitarian service for his work with Attorney General Robert Kennedy in helping to write the United States Civil Rights Act of 1964.

Morris practiced international law and trial law in Philadelphia from 1970 to 1993 as a partner with the Honorable Harold E. Stassen, former Governor of Minnesota and one of the five original signers of the United Nations Charter. During that period Morris was also a Professor of International Law and Ethics at the University of Pennsylvania Law School and served for two years as the Chief Assistant District Attorney of the City of Philadelphia. In March of 1983 Morris was asked by Guy von Dardel of Stockholm, Sweden, half-brother of Swedish diplomat Raoul Wallenberg, to sue the Soviet Union to force them to release his brother Raoul. This book tells the Wallenberg story of heroic life saving work in Hungary and reports on Morris’s pro bono effort in US Federal Court in Washington DC to achieve this awesome task of rescue. Morris Wolff is a distinguished lawyer and law professor. He is a cum laude graduate of Amherst College and of the Yale Law School, where he studied international law under Sterling Professor Myres McDougal and Federal Judge Guido Calabrese, of the U.S.Second Circuit Court of Appeals. Morris currently resides in Florida where he continues his career as an Associate Professor and Director of the Bethune-Cookman University Wild Cats Write! Program for Entering Freshmen.

President of the AIESEC (International Association of Students of Economics and Commerce) which has continued its mission for over 50 years with over 90,000 graduates in 83 countries.  Appointed by US Attorney General Robert F. Kennedy to serve in the creation of The Civil Rights Act of 1964 Served under President John F. Kennedy in the Office of Legal Counsel and worked directly with the President Marched with Marion Wright Edelman of the Children’s Defense Fund at the gathering on the Washington Mall of Dr. Martin Luther King when King gave his famous “I Have a Dream” speech in 1963 Worked with Senator Sherman Cooper of KY to draft and develop new laws on civil rights and integration Worked with Congressman Richard S. Schweiker, later the head of the Department of Health and Human Services under Ronald Reagan, in his campaign to end the oppression of Jews in Russia Served as Managing Partner in the Philadelphia law firm of Stassen, Kostos, and Mason and held that post for 20 years Published ten scholarly articles on International Business and Family Law Filed a historic lawsuit in the District of Columbia against the Soviet Union on behalf of Raoul Wallenberg, a Swedish Diplomat, hired by the United States to save Jews in Hungary during WWII. Judge Barrington Parker found the Russians liable for the kidnapping of Wallenberg and awarded the family damages in the amount of 39 million dollars Senior policy advisor at the Woodrow Wilson International Center for Scholars in Washington D.C. Notable clients include: the S.C. Johnson Company, Nippon Telephone and Telegraph Company, H&H Poultry of Delaware, and others in over 17 countries

Born in 1936 in Philadelphia, PA
Graduated with honors from Amherst College in 1958 and Yale Law School in 1962
Professor of International Law and Ethics at the University of Pennsylvania Law School and at Kings College/London, and at UCLA
Awarded the John Woodruff Simpson Scholarship for International Law in 1958 by Amherst College and studied in Geneva, Switzerland
Professor of Constitutional Law and American Literature at Morehouse College in Atlanta Fluent in French, Spanish, and German
Morris currently resides in Florida where he continues his career as an Associate Professor and Director of the Bethune-Cookman University Wild Cats Write! Program for Entering Freshmen.
Father of two daughters, Michelle and Lesley

Notable Accolades
2011 Honored to receive a scholarship to attend and participate in the 2011 Summer Institute of Yad Vashem in Jerusalem. The Institute focuses on Holocaust Studies. He will attend and learn more about Raoul wallenberg’s work and will be interviewing survivors living in Israel who were saved by Wallenberg.
2005 Honored by the United States Congress for his work in seeking the release of Raoul Wallenberg, the Swedish Diplomat from the Soviet Union. The Honorable Jan Eliasson, President of the UN General Assembly, and former Ambassador from Sweden to the U.S. and to the U.N. said, “This dedicated work of Morris Wolff in this creative effort to rescue diplomat Wallenberg stands as an inspiring example for young lawyers who seek justice and who are looking for a worthy cause worth fighting for in the future.” 1993 United Nations Peace Award for Humanitarian Service received at Carnegie Hall and on the same stage with Audrey Hepburn
1983 Along with Rosa Parks, Wolff was awarded the NCCJ Medal (National Council of Christians and Jews) for humanitarian service in his work on civil rights.