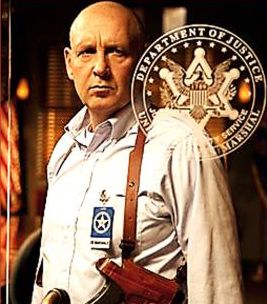 Nick Searcy has had a consistent presence in American film and television going on for three decades. He has starred in independent films as well as studio blockbuster hits, including The Ugly Truth, The Last Song, Castaway, The Fugitive, Head of State, Runaway Jury, The Assassination of Richard Nixon, Blood Done Sign My Name, The Dead Girl, An American Crime, and Fried Green Tomatoes, among others.
On television, Nick was a series regular on five different shows: 7 DAYS, AMERICAN GOTHIC, FROM THE EARTH TO THE MOON, RODNEY, and EASY MONEY, and has guested on many shows such as THE WEST WING, BOSTON LEGAL, and CSI.

On television, he is best known for the tough-but-tender Chief Deputy Art Mullen on the FX series, “Justified.” He also appeared as Deke Simmons in Hulu’s 11/22/63, and has been a series regular on UPN’s 7 Days, CBS’s American Gothic, HBO’s From The Earth To The Moon, ABC’s Rodney, and CW’s Easy Money, and guest starred on countless shows including Lethal Weapon, The Ranch, Chicago Med, Hawaii 5-0, Mom, Hot in Cleveland, Intelligence, Archer, The Mentalist, Lie To Me, Without a Trace, The West Wing, CSI, I’ll Fly Away, In The Heat of The Night, and NCIS.

He also has shocked horror fans in the features DEADLY END, COLD STORAGE, and TIMBER FALLS. His combined abilities to bring Hollywood “inside baseball” into the public eye while also being one of its top starting pitchers is epitomized in MONEYBALL from Sony Pictures.

His language can often be salty and sometimes even not fit to print, but by God, he will say what’s on his mind, and he doesn’t care if he hurts the feelings of those who worship at the altar of falsehoods while saying it. Perhaps that is likely why the late Rush Limbaugh invited him to host his show on occasion.

As a huge fan of wrestling, Nick has a deep appreciation for the ability to combine dramatics, aerial acrobatics, and submission holds… and that’s just during an entertaining debate. Just ask anyone who has been the victim of one of his epic pile drivers on Twitter, or been flattened by one of his flying splash bombs from high upon the third rope of truth, justice, and the American way.