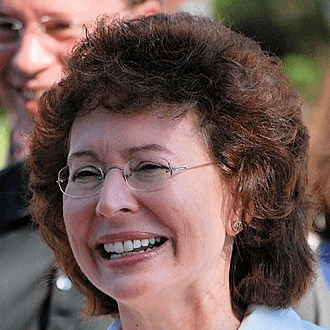 Straightforward: Ways to Live and Lead,” a book on effective leadership

Pam Iorio is the President and CEO of Big Brothers and Big Sisters of America.

She is among Tampa’s favorite sons and daughters. A University of South Florida alumni, she has served as a Hillsborough County Florida commissioner, the elected supervisor of elections, and as a popular two-term mayor of Tampa Florida.

For the past six years, she has worked as president and CEO of Big Brothers Big Sisters of America, initially commuting each week to Dallas. In 2015, she moved the headquarters of the nation’s oldest and most effective mentoring organization to Tampa, her adopted hometown.

“On all fronts, the past six years have been a very rewarding time,” she said. “The people involved with this organization tend to be some of the best people I’ve ever worked with. They really care about the young people in this country.

She enrolled in a history master’s program at USF, taking her courses at night so as not to interfere with her day job while then working in the election’s office. “In the course, I became focused on civil rights history in the 20th century, and in particular, Tampa’s history and the barriers that were once set up to keep our black citizens from voting”.

“All this led to me to wonder how I could have more of an impact on this community,” she said, “and that’s when I decided to run for mayor.

“I always wanted to be in public service and started out pretty young, almost right out of college,” she said. “I still think, in the most positive way, that politics is the way to make your community better. And I could not think of any position to make the place you call home a better place than that of mayor. That period of my life was very fulfilling.”

Born in Maine, Iorio moved to Tampa as an infant and attended Hillsborough County public schools. She earned a bachelor’s degree in political science from American University in Washington, D.C. She ran for a seat on the Hillsborough County Commission when she was just 26 years old, becoming the youngest person ever to serve on the board.

In 1992, Iorio successfully ran for the Hillsborough County Supervisor of Elections seat and served the better part of three terms there. During that time, she was appointed president of the State Association of Supervisors of Elections and became the spokeswoman for the organization during the controversial 2000 presidential election, when the eyes of the nation were focused on voting recounts in Florida.

In 2003, Iorio was elected mayor of Tampa, serving two terms before leaving in 2011 with an 87 percent approval rating. Iorio turned to writing after her two mayoral terms were up and drew from her three decades in public life to write “Straightforward: Ways to Live and Lead,” a book on effective leadership. In 2012, she served as interim CEO of The Children’s Board of Hillsborough County until 2013 when a successor was named.

In 2014 Iorio was asked to temporarily lead Big Brothers Big Sisters of America to help them through some challenges. What started as temporary turned into a longer commitment.

Under her leadership, the non-profit implemented a five-year strategic plan to build needed infrastructure for the 240 agencies across the nation and unveiled a modernization of the brand and message. Last year, the Big Brothers Big Sisters of America equipped each of its agencies with a state-of-the-art technology system to track each match and its outcome.

Having Big Brothers Big Sisters of America headquartered in Tampa is plus for everyone, she said.

She enjoys heading such an altruistic organization and she will talk extensively about all the good the non-profit does in the communities it calls home.

“I was asked to step in on a temporary basis, just to help out,” she said. “It turned into six years. We just have a wonderful team; the board, all the agencies across the country and the staff. We all work together to invigorate the entire network.

“My job is to build the infrastructure and support that our network of agencies needs in order to grow and serve more children more effectively and more efficiently,” she said. “It is so gratifying, and, over the past six years, I’ve worked with some of the very best people all across the country.”

Iorio was featured in People’s “25 Women Changing the World in 2018” and she currently serves on the Bob Graham Center for Public Service Council of Advisors and on the Board of Directors for TECO, an Emera Company.