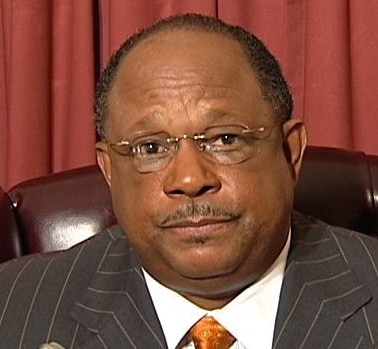 James David Manning (born February 20, 1947) is chief pastor at the ATLAH World Missionary Church on 123rd Street in New York City. Manning grew up in Red Springs, North Carolina, and has been at ATLAH since 1981. ATLAH stands for All The Land Anointed Holy, which is God’s name for Harlem.

Manning graduated from The College of New Rochelle with a Bachelor of Arts degree and continued on to Union Theological Seminary in the City of New York where he was awarded a Master of Divinity. Manning also holds a Doctor of Philosophy degree from the ATLAH Theological Seminary, an unaccredited educational institution.

Pastor Manning is the husband of the Wonderful Elizabeth Sarah Manning, as well as a father and grandfather. Author of 70 Letters to ATLAH, published by Welstar Publishing in 1992; The Oblation Hour, published by Publish America, LLP in 2006.

– ATLAH Men’s Business Association: Vibrant men’s group established in 2003.
– ATLAH Superior: Started as a group of 70 women in 2003 for the establishment of a specialty food service supermarket in

ATLAH World Ministries: Established in 1992 as an 1/2 hour Christian teaching radio, expanded to a weekly TV broadcast heard on several networks, and currently on YouTube and several other venues.

Great Tomorrows Elementary/Middle School and ATLAH High School: The school was established in 1994 for the purpose of educating young people from elementary to high school focused upon a private Christian based curriculum education founded on the M.A.D. Curriculum.

Attended Oxford Round Table at St. Antony’s College in the University of Oxford ,16 August 2004

Manning is fiercely opposed to the gentrification of Harlem and calls for its residents to boycott its shops, restaurants, doctors, banks and churches. That action, combined with a general rent strike, would force all property owners out of Harlem, he said, leaving the neighborhood to its rightful inheritors: black people. Manning calls his plan “No Dew, Nor Rain,” after Elijah’s warning to Ahab, king of Israel, of a coming drought. “When there’s no dew, no rain, there’s a drought – there’s all kinds of suffering,” said Manning. The whole of Harlem, he said, is to be a “drought zone.”

The ATLAH World Missionary Church has become a landmark in Harlem, and the teaching of the church has attracted thousands to the light; it brings to a once forsaken community.
As a younger man, Manning burglarized homes, mostly on Long Island. He spent about three and a half years in prison in New York and Florida for burglary, robbery, larceny, criminal possession of a weapon, and other charges before his release in 1978. While in prison, he became a devout Christian.
His congregation, “ATLAH Worldwide Missionary Church” is the former Bethelite Missionary Baptist Church. The church is also the site of the ATLAH Theological Seminary, where “the renowned and educationally astute Honorable James David Manning, PhD” offers classes on preaching and prophecy (et al.)

2008 Election
Manning achieved some controversy in the 2008 presidential election after ATLAH posted several sermons of his that were harshly critical of Democratic candidate Barack Obama on the website YouTube. Among other accusations, he called Obama a “good house negro” in one sermon while in another he referred to Obama as “trash” due to his mixed race heritage and accused him of being a “pimp” and “long-legged macdaddy,” citing the viral video “I Got a Crush… on Obama”. He stated that Obama “has the cadence of an Islamic person,” and he called Obama’s mother “trash.” Manning defended his sermons in an interview on Fox News, saying that “we also have to talk about his character.” He further stated that God told him that Hillary Clinton would win the Democratic Primary and that Obama would not become the President. Manning illustrated how God showed him Hillary would win by revealing her card in the light. After his prophecies didn’t become true, he defended them by saying that it is what God said to him and he will continue to follow in his faith.

The sermons drew the attention of the Americans United for Separation of Church and State, who filed a complaint with the Internal Revenue Service objecting to alleged violations of laws granting tax-free status to churches on condition that they refrain from certain forms of political activity.