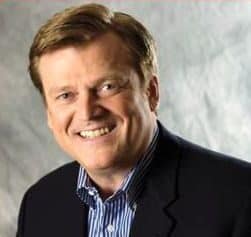 Chief Executive Officer of The America Project Patrick Byrne is a True American Patriot and the embodiment of the American dream. He is the Founder and former CEO of Overstock.com. Prior to building a $2 billion dollar enterprise, he earned a Bachelor of Arts in Chinese Studies from Dartmouth, a Master of Arts in Philosophy from Cambridge (as a Marshall Scholar), and a PhD in Philosophy from Stanford University. Dr. Byrne was named National Entrepreneur of the Year by Ernst & Young. The 20 years as a CEO and E-Commerce pioneer were ones of toil, sweat, David vs. Goliath matches, and innovative breakthroughs.

In 2004 Patrick and the oligarchy got cross-wise, and they have been at odds ever since. Dr. Byrne believes the oligarchy has two wings, Wall Street and the Deep State, and that he has them surrounded. Patrick fully devotes his time, resources and uncommon leadership helping to save this great Nation.

Patrick Byrne is a Libertarian who believes Election 2020 was rigged, and that the results should be objectionable to every person who believes, “just government derives its power from the consent of the governed.”

PATRICK IS ALSO KNOWN AS THE GODFATHER OF BLOCKCHAIN TECHNOLOGIES.  HE IS THE AUTHOR OF THE #1 BEST SELLER BOOK CALLED, “THE DEEP RIG”
WHICH IS NOW VIEWABLEIN DOCUMENTARY FORM.

PATRICK IS NOW SELFLESSLY REPRESENTING PATRIOTS ACROSS THE NATION AS CEO OF THE AMERICA PROJECT.