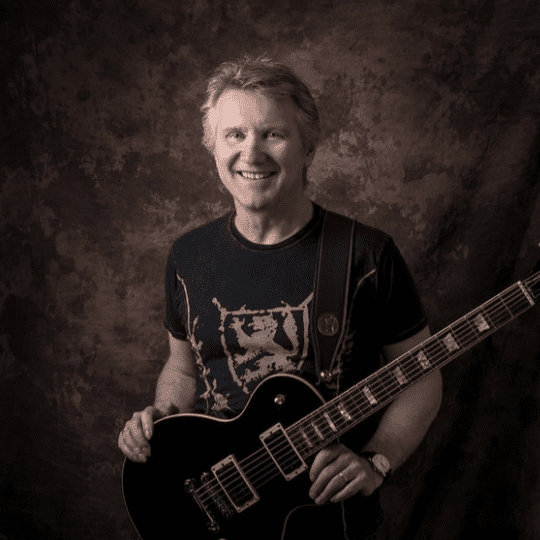 Rik Emmett was a relatively unknown singer/songwriter/guitarist on the local Toronto scene in September of ’75 when he joined a newly-formed hard rock trio called Triumph. By 1979 three albums had gone platinum in Canada and two charted in the States, receiving serious radio airplay. By ’81 Triumph was firmly established as one of the premier touring rock acts in North America, with generous FM radio airplay support and heavy rotation on the fledgling MTV cable channel. In the next seven years, the band released ten gold albums, with four turning platinum in Canada. In the U.S., two went gold within weeks of release.

Emmett’s name frequently appeared highly ranked in guitar magazine polls and he has won some most prestigious awards, including Best Lead Guitarist in a national poll in 1981 and Gibson Guitars top 10 guitarists of all time.

Triumph reunited briefly for concerts in Sweden and Oklahoma in the summer of 2008, and was inducted into the Canadian Walk of Fame in 2019. That reunion was inspired by a very special request,…one made by truly one of Rik’s closest life- long fans, his brother Russell who was fighting terminal cancer. Russ expressed a desire that Triumph would re-unite in some special way… and for that wish being granted, their fans are eternally grateful.

In addition to a multi gold and platinum album filled career with Triumph, Rik’s solo career has also been most notable. A duo project with Dave Dunlop called Strung-Out Troubadours won both Duo Of The Year and Album Of The Year honours at the 2007 Canadian Smooth Jazz Awards. The follow-up CD, entitled Push & Pull, was released in the late spring of 2009. In the fall of 2009, Rik collaborated in an acoustic guitar trio (the P.R.O. Trio) project, Pavlo, Rik and Oscar Lopez. Entitled “Trifecta”, the CD was released followed by the most extensive Canadian touring schedule that Emmett had been involved in since the ‘80’s, commencing in January of 2010 and continuing throughout the year. The album was nominated for a JUNO award as Instrumental Album of the Year. And there’s more solo projects we’ll discuss little further on.

Rik was a popular columnist for Guitar Player magazine and his 13 years of Back to Basics resulted in his published educational series, For The Love of Guitar. He is also an innovative music educator of long standing with Humber College in Toronto, Having taught there for many years. And he is the Artistic Director Emeritus of the annual Songstudio Songwriting Workshop. Just how cool would it be to have “Professor Emmett” as your teacher in a real life school of Rock?