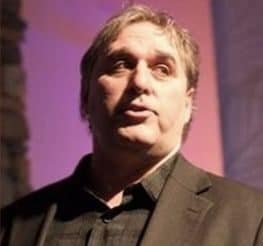 Coming out of the 60’s into the 70’s Russ was a rock n rolling bar fighting seeker, consuming drugs/alcohol and searching through every door he could to find meaning. He was a dabbler in dark occultism and a practitioner of golden Buddha meditation where he was trained in astral projection to seek the ascended masters…. Russ says “I sought to experience anything  spiritually, supernatural and alternative I could …..to find what it was I was looking for.” But I didn’t, instead I found myself on the edge of death and hell itself…. see more in the upcoming autobiography ‘Once Blind’.

Russ Dizdar, started out in the AOG Church, was licensed to and then Ordained to the ministry October 1978 reformation Sunday at Green Baptist Church by the SBC. He has served as Sr. Pastor of 4 churches over a 30 year period. He was also Ex. Director of Greater Akron Youth For Christ, a Police Chaplain UNIT 78 UAPD. He is (1982) Founder and now directs Shatter the Darkness and Preemption Broadcast (The Ragged Edge Radio Broadcast) (2008). He has preached in Churches and conferences across the USA, held training seminars and loves to do crusade evangelism. He has launched web sites and broadcasts messages that have been heard and downloaded in over 150 countries. The internet sites with the free teaching/seminar audio courses have been downloaded over 19 million times (MP3s).

Russ has been on many radio stations for interviews most of which are archived on the web. Russ has spoken and presented sessions at conferences in Ghent W.V., Michigan, New England area, Sharpsville PA, Washington PA, St Louis, New York, Indiana, Nashville Tenn. and Las Vegas, Groton CT, Mansfield OH, Branson Mo, and Canton Ohio. He has launched REEP mission trips in over 70 cites and one into France in 2012, Germany and then Poland in 2013. The Radio interviews on many other stations.

Russ has studied at Cumberland College Biblical Studies, the University of Akron Criminology and Military science, 2 1/2 years at Moody Bible School and in 1984 at Malone College went through graduating services for a BA in Religion/Philosophy, with advanced studies in Theology, Apologetic s and Greek.

He has also been to many training conferences and seminars including those on Satanic Ritual Abuse, SRA-MPD-DID, Mind Control, Spiritual Warfare, Abduction Research, Deliverance/Evangelism and other various fields. Youth for Christ USA training in leadership, evangelism and youth ministry, International Police Chaplin’s courses, Navigators discipleship, MasterLife and MasterBuilders discipleship/leadership training. Church leadership, growth and other seminars, courses and conferences in Church related leadership, management and development.