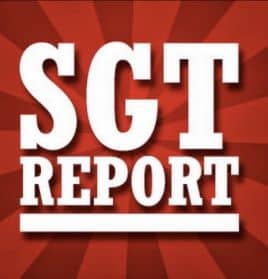 Sean has a BA in Journalism from the University of Wisconsin, and upon waking up the global fascist international banking system in the years following the 9/11 event, Sean launched the SGTreport You Tube channel in 2010, and the website SGTreport.com in 2011, and devoted himself to uncovering the crimes of what is now widely referred to as the New World Order.

SGT Report is the corporate propaganda antidote and the antithesis of mockingbird media mainstream “news”. Providing exclusive original content and the very latest breaking REAL news &information from the world’s most trusted alternative media sources, SGT Report is your daily source for truth, in a time of universal deceit.

Many people are familiar with the SGT Report and SGT-TV. Sadly, they are also now aware that SGT and more than 15 other similar independent media channels were abruptly and unceremoniously taken down from YouTube, de-platformed, de-funded, and even fiscally obstructed by funding partners such as Patreon, Pay Pal, and Mail Chimp.

SGT report and many other independent information outlets have just begun to fight by having their day in court. They were met with less than objective fairness which will be explained shortly…

Sean Turnbull of SGT Report/SGT- TV is one of 15 plaintiffs participating in a US federal lawsuit against tech giant Google. This case relates to the wrongful actions against all 15 of them, and possibly others yet to come. (*See bitchute link in “articles” for details.) You are not only invited to observe these proceedings online and their results, but are respectfully asked to please tell others to do so. The greater the number of eyes and ears are known to be watching and listening upon these developments will hopefully have a profound impact upon the judiciary, law-makers, and ultimately, our world due to the significance of this landmark case against censorship.

Fighting tech censorship a report from the insider who is living it.
https://www.sgtreport.com