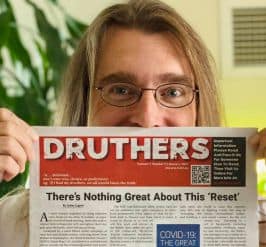 In a world where 6 major corporations control the flow of 90% of the media information being consumed by most people, including good old-fashioned newsprint, there exists a huge void for those who may seek to know just a little or even a lot more than what most cookie-cutter print publications are prepared to share.

There are a few reasons that our modern-day, real-life versions of Lou Grant, Perry White, Lois Lane, and even Peter Parker have seemingly vaporized. Their jobs in real life today would likely have been outsourced. Sadly, too has the element of deeper investigative of journalistic integrity across town from the Daily Bugle to The Daily Planet.

Lest we remember, real people like the late Gary Webb and Seth Rich have met with some very real, non-fictional fates for their dedication in this pursuit as well. Real evil knows no bounds, just ask Julian Assange, Roger Stone, and people like them.

Nowadays, even if and when the benchmark of news reality occurs by way of “man (or woman) bites dog” as authentic news; censorship and the old fashioned “spiking” of many groundbreaking and newsworthy stories have taken their toll on true journalism, and far too often still does in our corrupted mainstream media.

When advertising buys on the part of; political interests, corporations, big pharma or others equate to such a substantial portion of MSM newspaper revenues, these factions also command influence, criteria, and even censorship decisions of what’s fit to print …according to just who? Nobody at Druthers will ever be censored, silenced, or compromised by the threat of their paychecks leveraging their integrity. Like almost all of history’s greatest pioneers of patriotism and lovers of liberty, this is a volunteer army and quite a sizeable one at that.

Fortunately, there are still some story breakers and old school “muckrakers” dedicated to shining the light of truth upon deception and corruption in our world and shining that light far and wide. In the spirit of author Upton Sinclair’s, The Jungle a watershed that once exposed; The exploitation of people, less than “healthy” conditions in the food supply, and some of the biggest examples of political corruption have been resurrected once again.

Start the press, Shawn Jason’s truth-based publication Druthers has just recently begun. He hopes this will be a long run and Druthers will become a household word, in the hands of readers and online. He guarantees his ink will not ‘smear’ and never runs, especially from exposing truth, evil, or corruption.

Many of us do not just feel but know with certainty that tyranny is indeed upon us. We must act quickly. Some of our social justice legislators, Antifa and Soros funded statue snatchers might soon even go as far as to try and rewrite the story and the history behind the reasons, and our one-time six-inch headlines that boldly read; “Allies Land at Normandy”.

Shawn Jason is a man who has taken the adage; “If you want something done right in every sense of the word, you do it yourself”. He has literally put his plans to print and to press in his own soon to be “globally distributed”, truth-based, uncensored newspaper, and website, Druthers…and he’ll gladly share how you might just as easily do the same thing as well in your part of the world.