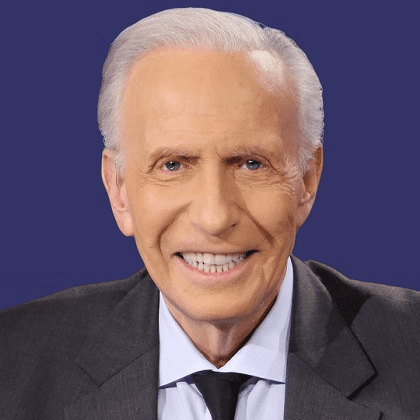 They Thought For Themselves,

There Must Be Something More,

Sid Roth has been on the cutting edge of Jewish evangelism for over 40 years. He began as host of a daily, 15-minute radio program, The Messianic Vision, and expanded that vision to become host of It’s Supernatural!, the internationally syndicated television show which currently airs 250 times per week worldwide.

Sid is the founder of ISN (It’s Supernatural! Network), a 24/7 digital television network. ISN produces live broadcasts and original programming in its Charlotte, NC, studio. It’s Supernatural!, the weekly flagship show for ISN, is designed to attract the unsaved. Sid positions himself as an investigative reporter, interviewing strong believers in Jesus who have experienced miracles or supernatural encounters. At the end of the program, Sid speaks directly to the viewer about how to know God.

In 2016 the ministry acquired METV (Middle East Television) which reaches over 25 countries in the greater Middle East, including every home with a television in Israel. Sid’s greatest desire is to see souls saved and believes the key to worldwide evangelism and the Lord’s return involves going “to the Jew first” (Romans 1:16).

At the forefront of the modern Messianic movement in the 1970’s, Sid was a main speaker for the first large Jewish evangelistic meetings in St. Petersburg where 2,000 people receive the Messiah. Today Sid still conducts international outreaches with his “Lectures on the Supernatural,” inviting unsaved Jewish people who want to see miracles. He has seen thousands of Jewish people receive Messiah, with over 10,000 professions of faith – primarily in Israel – in the last five years alone.

Sid is a prolific author. They Thought for Themselves, a collection of Jewish testimonies, has been printed in nine languages with more than 3.1 million copies distributed worldwide. Several years ago, God told Sid in a dream that more Jewish people would come to know Him through this book than anything Sid had ever done. Sid’s ministry is systematically mailing this book to Jewish households throughout North America.

Sid’s autobiography, There Must Be Something More!, details the supernatural rescue of a Jewish stockbroker, lost in the occult, separated from his family. God restored Sid’s mind, family and career. In 2018 a revised “millennial” edition was also produced.  This new edition is systematically being sent to a younger audience of North American Jewish millennials.

Sid has appeared numerous times on The 700 Club, TBN’s Praise the Lord – as both host and guest, Daystar’s Marcus and Joni, and has co-hosted 100 Huntley Street in Canada.