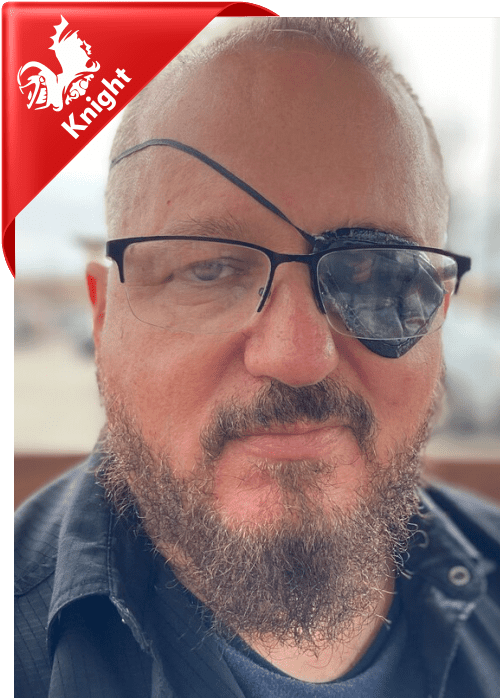 Oath Keeper founder and president Rhodes says his organization merely stands for a strict interpretation of the Bill of Rights, which service members and law enforcement officers swear to uphold. He also believes one of the primary purposes for his organization is to educate officers and military personnel about the laws they’ve promised to defend.
Rhodes’ perspective is that the officers’ actions after Katrina and other unconstitutional excesses by officers are a matter of ignorance at work. Whether it is institutionalized or willed ignorance is immaterial, he says.

“An honorable man who is doing his very best necessarily becomes
knowledgeable,” Rhodes observes. “Because if you don’t know what’s right or wrong, you can be an honest person with great integrity and courage and still do the wrong thing.”
According to Rhodes, the Oath Keepers’ mission is simply to get back to basics—to ensure that at least part of the country’s constituency knows and understands the Constitution and its ideological underpinnings to a sufficient degree that they refrain from violating its tenets out of ignorance, apathy, or fear of political reprisal.

“It’s not about finding like-minded officers,” says the former Yale history
instructor and public defender. “It’s about creating people who are knowledgeable about the Constitution. What we’re trying to do is cure the dumbing down Americans have gotten from the schools. They’re not taught history and they’re not taught the Constitution. I can’t tell you how many times I’ve talked to rank and file military officers who haven’t read the Constitution. Police officers, too. Have they read the Federalist Papers? The writings of the Founders? It’s very rare. That’s what we’re trying to do: Simply show the intentional ignorance of the American population.”

Rhodes—whose 2004 Yale Law School paper, “Solving the Puzzle of Enemy Combatant Status,” won the school’s award for best paper on the Bill of Rights— says the root of the problem lies within our country’s basic curricula. But he also believes there is a silver lining to be found in addressing this deficiency: It’s easier when the person reading the Bill of Rights isn’t approaching it with notions instilled in them by revisionists.

Tip of the Spear

Rhodes, a disabled Army paratrooper, determined very quickly that he wanted his grassroots organization to work with the men and women serving in the trenches of law enforcement and the military. “We focus on the guys at the tip of the spear, the ones who will be giving the orders,” Rhodes says. “The big concern we have is if we have a legion of oath breakers and traitors in Washington, D.C., who have utter contempt for the Constitution then all they care about is power. They just do whatever they think they can get away with.”

Rhodes quickly gained the attention of like-minded officers. “In late 2008 I heard on the Internet about the group forming, so I e-mailed Stewart to get more information,” says Oath Keeper board member and law enforcement officer John Shirley. “Shortly after that, I had a conference call with him and some other founding members and discovered the group was exactly the kind of organization I had felt was needed for several years.”

Shirley got involved and was soon asked to serve as the Texas Chapter’s vice president. Less than a year after joining the organization, Shirley addressed a 5,000-member strong Tea Party rally in San Antonio with a speech that was to become a model for future Oath Keepers calls to arms. By July 2010, Shirley was appointed Texas Chapter President and later National Peace Officer Liaison, and he now serves on the organization’s board of directors.

Since the birth of the organization, Oath Keepers’ members have found themselves subject to all manner of suspicion and labeling, and repeated criticism by the anti-Klan Southern Poverty Law Center (SPLC), which cites the Oath Keepers as “a particularly worrisome example of the Patriot revival.” Responding to the SPLC report on the Lou Dobbs radio show, Rhodes said, “They think the word ‘patriot’ is a smear.”

The intent of the SPLC and other critics like the Anti-Defamation League is to characterize the Oath Keepers as a bunch of Timothy McVeigh wannabes. And unfortunately for those who defend the group, there are some fringe elements that are not so much pro-Bill of Rights as anti-government. One Oath Keeper, a former naval officer, actually participated in a plot to take over a Tennessee courthouse to free a man who was arrested for trying to enforce a citizen’s arrest on a judicial official who refused to investigate President Barack Obama’s citizenship. There are also elements in the group’s “Declaration of Orders We Will Not Obey” that smack to some of black helicopter globalist paranoia. Rhodes says the list doesn’t mean the Oath Keepers believe all of these actions are imminent, merely that they will refuse to participate in them should they happen.

Perhaps the criticism that makes Rhodes bristle most is any insinuation that Oath Keepers promote white supremacy. Opining on the Oath Keepers, a visitor to the SPLC Website asserted that its members are “nothing but the Ku Klux Klan with a new name and without the silly robes and pointed caps.” Oath Keepers refutes such charges formally as evidenced by its bylaws and informally by the demographic of its membership. Rhodes himself says he is one-quarter Mexican and part Apache.

Rhodes also laments that Oath Keepers has borne the brunt of attacks from Democrats simply because that party currently occupies the White House. “That is the unfortunate reality of our political system,” he notes. “When your party is in political power and anybody criticizes them, you attack.” The mission of Oath Keepers crosses political boundaries, he says. “I support the Constitution. I don’t like oath breakers, whether they’re Republicans or Democrats.”

While the organization’s stance on the Second Amendment has garnered the lion’s share of media-related attention revolving around the Oath Keepers, it is another amendment that looms ever larger as a barrier against the organization communicating its message.

Many active law enforcement officers find their First Amendment rights cramped by their employing agencies. In some cases, such suppression is due to strict departmental regulations barring officers from voicing personal opinions about law enforcement in public forums, whether printed in newspapers and magazines or posted online in social media. In other cases, the lack of a clear policy may lead officers to err on the side of self-suppression. In either instance, many officers are fearful to stand up and openly voice their opinions.

Because of the restrictive policies of many law enforcement agencies, Shirley finds it difficult to believe that “there are officers out there who are working the streets, fighting crime, protecting the public who, when they hang up the uniform at night, can’t exercise their basic rights under the First Amendment.”

As an active duty police officer with the Houston Police Department, Shirley clearly and repeatedly states that when he advocates for Oath Keepers, he does so as a private citizen and not as a representative of his department. In doing so, he is careful to act within the department’s policy.

In Shirley’s estimation, “Just because you wear a badge doesn’t mean you surrender your First Amendment rights. I look at it like departments should not try to squash the First Amendment rights of their officers and step all over the fact that because they happen to carry a badge doesn’t mean you hang up your constitutional rights so you retire. That’s a very unethical and a very dangerous place to go for an agency.”

In recent months, the Oath Keepers have argued against what they say are new and alarming overtures by the Obama administration. While the need for greater intelligence sharing between law enforcement and military parties is a legitimate one, the melding of their responsibilities through interventionary operations relating to homeland security and narcotic investigations further elevates Rhodes’ concerns.

High on the Oath Keepers’ list of concerns is Eric Holder’s stumping for the usage of drones on domestic targets and the drumbeat for gun confiscation among some liberal political camps.

“They don’t understand that they are putting police officers on a collision course with veterans and gun owners in their communities,” notes Shirley. “The Oath Keepers’ message for both sides is to not to bleed for corrupt politicians. That means that police officers have to refuse to use force.”

The Oath Keepers believe that what they see as the transgressions against the Constitution committed under both Bush’s and Obama’s watch will encourage Americans to educate themselves as to the true breadth of their rights and to re­examine their society.

Rhodes and Shirley are reaching out to active law enforcement officers to help spread the word and renew their oaths to uphold the ideals within the Constitution.

“One guy at the right place at the right time can make all the difference for an entire unit,” says Rhodes. “It’s nice to have police officers use their quiet discretion and make it known within their communities that they are on your side. But it’s also critically important for the tip of the iceberg to be there too. There are very vocal and very public peace officers who step up and risk their careers like John [Shirley] is doing to say there are people among us who understand the Constitution and will not do this.”

In the meantime, Rhodes sees the organization as a means of preventing confrontations and de-escalating situations both through finding common ground with less predictable sources and mitigating the prospects for needlessly precipitous actions by law enforcement administrators.