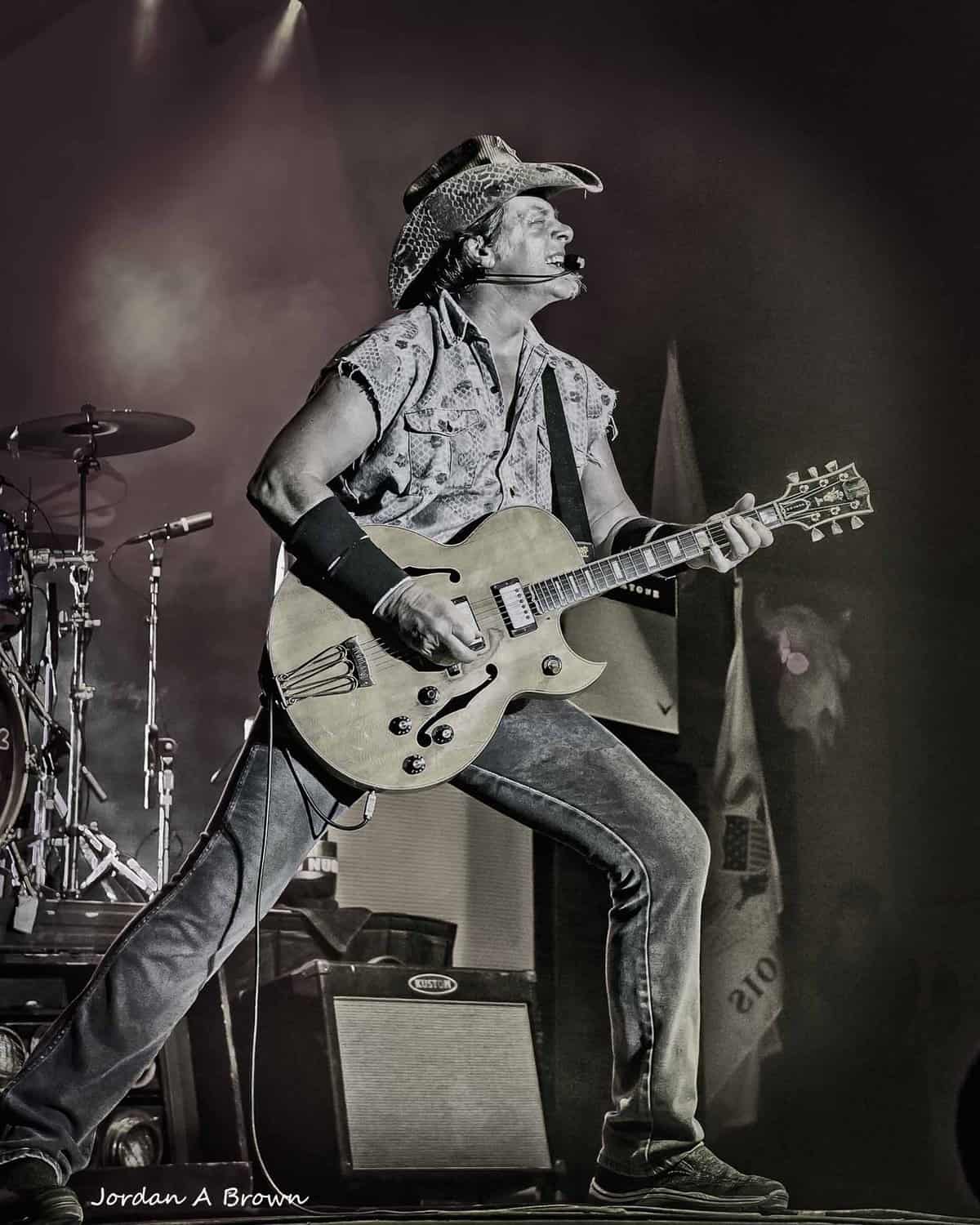 *The Motor City Madman thrilled fans by performing with Kid Rock during a record-setting string of sold-out shows in Detroit last month.

* Nugent was named Best Host on Outdoor Channel for the third straight year! Ted and Shemane Nugent were honored for Ted Nugent Spirit of the Wild at the Shooting Hunting Outdoor Trade Show in January.

*An all new season of the award-winning Ted Nugent Spirit of the Wild is airing NOW on Outdoor Channel! Tune in Tuesdays at 3:30pm ET & 8:30pm Eastern, and on Sundays at 12:00am Eastern!

* Ted was a featured speaker at the NRA 2015 Annual Meetings & Exhibits in Nashville.

*Ted’s iconic hit, Stranglehold, is featured in the new Carl’s Junior Ad, which debuted during the Superbowl.

* Ted and Shemane Nugent served up some Texas hospitality as they hosted Sarah and Todd Palin at their SpiritWild Ranch for shooting, archery and other amazing adventures on Amazing America with Sarah Palin on Sportsman Channel.

* SHUTUP&JAM! was named First Runner Up in Ultimate Classic Rock’s Best Album of the Year for 2014.

*The SHUTUP&JAM! Tour concluded with an inspiring Show of Support in Midland, Texas. This benefit concert kicked off a campaign to construct a memorial to honor those who have fought The War on Terror. “Ted brought a message of support for all who serve, and a call out to everyone in our sold out, packed audience to stand up for America!” said show organizer Terry Johnson

*Also in July, Glenn Beck brought tractor-trailers full of supplies to help 60,000 youngsters who have crossed into America illegally in 2014. And he got some help from Ted Nugent! In conjunction with Hunters for the Hungry, Nugent and the outdoor community donated thousands of pounds of venison and other wild game to aid the effort.

*Ted was guest of honor at the Salute to Heroes Patriot Dinner in League City, TX April 12. The event celebrated Operation Finally Home, which builds mortgage free homes for America’s war wounded and widows of the fallen.

*Ted Nugent reunited with the highly successful Midwest Rock & Roll Express lineup of Styx, REO Speedwagon and Nuge himself for the Rock to the Rescue fundraising concert on Dec. 4, 2013 in Bloomington, IL. The sold out show raised in excess of $400,000 for affected communities in central Illinois that were left reeling in the wake of devastating tornadoes.

* Nugent was recently named Detroit’s Greatest Guitar Player of All Time by readers of MLive!

* Our favorite outspoken, liberty-loving author-rocker is writing for WorldNetDaily. Catch his exclusive weekly column, “The Ted Offensive,” every Thursday at WND.com. “Ted Nugent rocks,” said Joseph Farah, editor and CEO. “And I don’t mean just as a music star. He rocks as an outspoken entertainer who is so politically incorrect. We’re honored that he would choose WND to sound off about what’s on his mind every week.”

* Ted Nugent has been named the official Ambassador of Outdoor Channel!

* Ted Nugent, producer & host of Ted Nugent Spirit of the Wild on Outdoor Channel received the Lightning Rod Award in recognition of his non-stop promotion of hunting and the outdoor lifestyle.

* Ted Nugent has joined with Michigan Attorney General Mike Cox to safeguard the Great Lakes. Cox has asked Nugent to lend his voice to educational Public Service Announcements to bring awareness and visibility to stopping the invasive Asian Carp and safeguard the 800,000 plus Michigan jobs connected to the health of our waterways.

* Ted has received the Bronze Smokey Bear Award for outstanding service in the prevention of human caused wildfires. Ted was recognized by the Texas Forest Service for the effectiveness of his PSA’s & print campaign. The Smokey Bear Award is the highest national honor one can receive for outstanding work and significant impact in wildfire prevention.

* Ted was made an honorary member of the C. Company Texas Airforce National Guard during a special ceremony at the Stars & Stripes Laredo Airshow in Texas. Nugent was honored for his service, dedication and support of the American Soldier.

*Ted Nugent has been inducted into the National Bowhunters Hall of Fame. Nuge was honored in two categories: Excellence in Bowhunting, and Literary Excellence. These categories acknowledge Ted’s widely acclaimed skills as an outdoorsman, and his promotion of bowhunting on an international level via his best-selling books and popular writings.

* Ted, White and Blue: The Nugent Manifesto attained the #8 position on the New York Times bestseller list! This marks the rock legend’s second time charting on the list, a spot he achieved with God, Guns, and Rock ‘n’ Roll. TED’s other successful books include Kill It and Grill It, Blood Trails: The Truth About Bowhunting and Blood Trails II.

* Ted lent his voice and likeness to Guitar Hero® World Tour, joining the all-star cast of rock legends featured in the game including Jimi Hendrix, Ozzy Osbourne and Sting.

*Ted Nugent and the Amboy Dukes were honored with Detroit’s Distinguished Achievement Award.

*Ted Nugent has been profiled on A & E’s BIOGRAPHY, and on VH1’s BEHIND THE MUSIC.

*Ted has received the James Fenimore Cooper Award for his many

accomplishments in the field of writing, and for his enormous contributions

in the promotion of our American hunting and outdoor heritage.

* Nugent was named Michigan Conservationist of the Year.