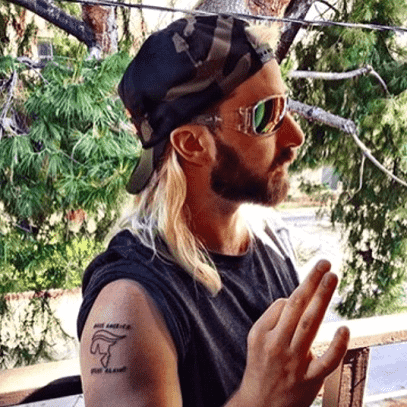 Baked Alaska is a comedian, rapper, and social media influencer from Anchorage, Alaska whois known for starting several internet trends that helped President Trump win the 2016 presidency including The MAGA Anthem, the Trump Starbucks cup, and getting his famous MAGA tattoo signed by Trump himself. He has also managed Milo Yiannopoulos and started MAGA 3x alongside Mike Cernovich. Prior to his involvement in the Trump movement he worked for Warner Brothers and Capitol Records as a talent scout and for Buzzfeed as a video editor and social media strategist where he helped start the Buzzfeed food account, Tasty, until he left after being ostracised for his polotical beliefs. In 2017 he attended several free speech rallies including Berkeley, New orleans, and Charlottesville where he was scheduled to talk about free speech desite his political differences with other speakers whose beliefs further right than his as he is a free speech absolutist, but instead was nearly blinded after being attacked with bear mace. Since than he has been wrongfully slandered, harrassed, deplatformed, his family doxxed, and ostracised despite revealing the truth of that terrible day and his condemnation against the alt right and Richard Spencer.