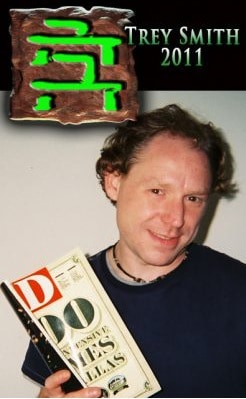 Trey Smith is the founder of the God in a Nutshell project.
Trey Smith has also produced some of the most controversial documentaries on the internet, and/or (likely) also on the globe. Many of Trey Smith’s documentaries on subjects ranging from the debunking of evolution, to the evidence of Noah and the flood, to the secrets of the book of Enoch, to the Nephilim, to exposing the occult, etc, etc, etc…. have touched the hearts and minds of millions around the globe — from the US to the deepest parts of many oppressive third world nations.

Not only has Trey Smith made many controversial documentary films, driving also criticism from  opposition; but has done many secular, religious and Christian talk shows on these same subjects.

Trey Smith accredits all the documentaries — “the good parts” — to Jesus Christ.
Trey describes his faith and Christianity “in a nutshell” as merely as continual journey and discovery to be a faithful servant in this place to his King, Jesus Christ.