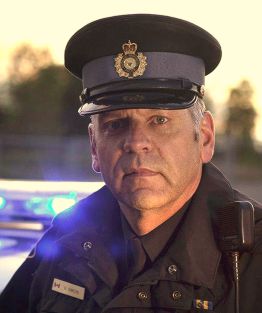 Getting an accurate report as to how a traffic accident or any incident actually occurred is usually difficult enough for police, even when those involved are present, alive and well. It’s much more difficult, if and when there are fatalities or multiple vehicles involved. For over three decades, Vincent Gircys was a member of the Ontario Provincial Police, his home province’s version of a state trooper, with some very special scientific training. His beat included Hwy. 401, a trans- provincial route some 510 miles long. His one- time home detachment oversaw a section of roadway that is 18 lanes wide and sees more traffic than L.A.’s Santa Monica freeway, making it the highest volume and highest density roadway in N. America.

With that distinction also comes some of the highest incidents of collisions and fatalities. He has investigated over 4,000 collisions and pedestrian incidents . Equipped with forensic collision reconstruction training, Vince was a very busy man with a steadily beeping pager, one that summoned him to the scene of over 200 horrific fatalities in just a few short years. He was an ERT officer (SWAT) and he is trained to read the fine details of blood evidence and patterns like a map, or a story from a book. Vincent has also been deployed to some very desolate and remote northern locations. Places where he was a minority in more ways than one, requiring the utmost in diplomacy, psychology and street smarts, rapid rapport building, cultural appreciation and policing skills.

As a highly trained forensic crash scene investigator, well versed in taking note of evidence, anomalies and their causation, his skill set has now been personally re-deployed to serve a new purpose in his retirement. Observing today’s world around him is an ongoing investigation being conducted with enhanced clarity, renewed acuity and laser focus. Despite the disappointment of his findings as to the emerging tactics of a universally compromised “management”, he wants every law enforcement officer active or retired to continue to demonstrate that; the Oath is the Oath, wherever you may be.

Now more than ever, “To serve and protect” does not, nor should ever include; trampling upon the rights and freedoms of the public or their constitutions. That should mean never obstructing people from attending religious gatherings, shopping in independent businesses or even enjoying some Texas style brisket… Vince is now sending an APB to the consciousness of all members of law enforcement everywhere… 10-999…10-7…10-21…Those codes mean; Officer needs urgent assistance, Let’s take a break, Call me we- need to talk. … So let’s talk…

1. Despite your own on the job sensory acuities and vast personal experience, it was actually a volunteer worker at one of your postings that awakened you to certain global “crimes in progress”…crimes against humanity, media distortions, political frauds, and local affairs with global influences. How did that happen … was

it a little like opening up a newly arrived envelope of unseen critical evidence?

2. When governments can actually buy mass control over the media narrative on a large scale, almost the same way a local used car dealer can buy ads to promote his car lot, might we have a problem here? Especially if the government may be fraudulently messing with our odometers and warranties, or even planting evidence for what they’re trying to sell us, so to speak? How do these many media anomalies strike you when the evidence at the scene is speaking much differently than the media’s version or their glaring omissions? In court, this is called perjury.

3. You are of Lithuanian ancestry. For those who may not know, many Lithuanians like other nations throughout Europe in WW2 suffered because their police and government officials were forcefully coerced by the SS to participate in some of the atrocities that comprised the Holocaust. Given your cultural insights and history, is there a part of you that is rising up today saying; “Hey people, we’ve seen this movie before and it doesn’t have a happy ending”… lets change the channel and wake up the unaware before ‘management’ gets even more coercive by leveraging our pensions, promotions or our jobs to act against the citizenry…

3b) Those who don’t learn from history are often doomed to repeat its mistakes. In your opinion, how well understood are the words “We were just following orders” along with the implications and harsh lessons of Nuremburg being appreciated by today’s police academy graduates…or even veterans? Should political history perhaps be a part of law enforcement studies?

4. Looking back, would it be fair to say that the cause of what diminished some people’s respect for their beloved images of Sherriff Andy, Deputy Barney and even Sgt. Preston to the point of being called ‘pigs’ by some. Perhaps this causation wasn’t because they were police officers… But rather, because of the way many police officers were being managed or ordered to respond to crisis situations such as anti- war demonstrations and civil rights marches …from Kent State to Selma, even that very dystopian G-20 summit you witnessed in 2010?

4b) JFK once spoke openly about secret societies. If they exist within the ranks of

law enforcement, might that influence be a conflict of interest or corruption?

4c) Just as the answers to many of mankind’s problems lie within the Bible, the answers to many of the problems facing today’s law enforcement lie within a publication called “Peel’s principles”. It is an old English text from 1829, outlining what the proper mindset and manner of a member of the constabulary should be. It also includes 9 fundamentals that seem to be just as appropriate today as they were then, in any setting anywhere in our world.

5. Your provincial capital city witnessed several human rights violations during the 2010 Toronto G20 summit. These included ‘kettleing’, the corralling of peaceful demonstrators with moveable fencing, random arrests. Meanwhile, “provocateurs” burning police cars went unchallenged and window smashing “rioters” were seen and videoed retreating behind police lines?…Mass detention centers and the incarceration of over1,000 people in very primitive surroundings. Ironically, the man responsible then for the city’s police force is now your… federal “minister of public safety”. Was he trying to send a message ?… Was this all some kind of dress rehearsal for someone’s future plans?

5b) Ironically, the very same SS coerced individuals in Lithuania were called “Sicherheitz Polizei”. Now what could go wrong at the hands of a group of men called “The Safety Police”?

5c) One infamous response by a policeman at the G20 scene to a demonstrator’s question about civil rights was;“This ain’t Canada right now”. It was much harsher than, “Dorothy, we’re not in Kansas anymore”. Who do you see as “The man behind the curtain”, not just at that incident, but at other similar ones around the world?

6. We recently hosted Adam Skelly on air, the rebel at the heart of the great Covid, anti-lockdown BBQ rebellion. You made it your business to be there personally as it all happened. What were your perceptions through the eyes of a veteran police officer, an awakened citizen and someone who actually did his best to mediate between two opposing factions? … Apparently the riot squad or the “crowd management” personnel as they like to be called, didn’t react in kind as you offered to shake each and every one of their hands as a sign of mutual respect?

6b) We heard a humorous report that;“even the horses had on their own special face masks”. Did the horses at least offer you a friendly nod in lieu of a handshake? Unlike one other Adam who had his ribs busted by excessive force at the G20 summit, BBQ Adam just got busted for selling his ribs. Why don’t certain police personnel not like ribs so much…or is it their bosses dictating what’s on the menu?

7. Is policing still something you would encourage young men and women to be a part of today?

8. What would you say to anyone in N. America who might refute the potential for crimes against humanity or genocidal atrocities by saying; “that just couldn’t happen here”?