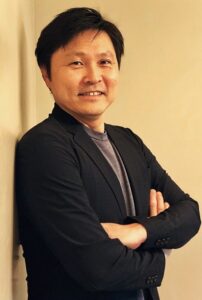 Yoichi Utebi is a producer and world lecturer for Happy Science. Born in Japan in 1968, Utebi grew up in Beirut, Lebanon and New York City. Raised in a rare Japanese Christian family, he was deeply touched by the culture and the beauty of Lebanon during his formative years in Beirut. However, the Middle East also exposed Utebi to the horrors of war, as he and his family dodged bullets and bombings before fleeing to London and back to Japan, leaving everything behind in a sudden evacuation. In the 7th grade, Utebi moved to New York for 10 years, where he was exposed to friends from multiple cultures and ethnicities. His rock band produced a popular album and gained quite a following in the city before Utebi decided to forego his musical pursuits and return to Japan.

After 12 years of experience in marketing and senior management at various American IT companies in Japan, Utebi joined Happy Science in 2010, where he quickly rose to Director of International Communications. Utebi is currently a minister and world lecturer for Happy Science and a producer on The Divine Protector – Master Salt Begins.